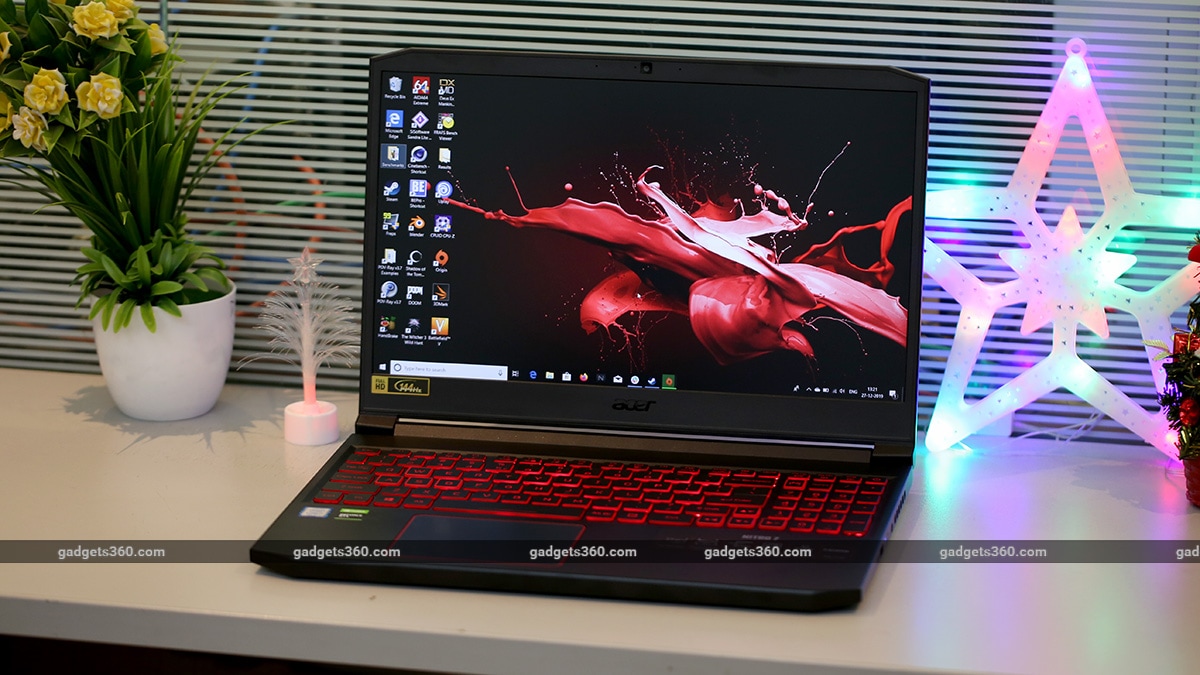 Back in April, Acer refreshed its gaming portfolio of laptops and also introduced a few new models. One of them was the Nitro 7, a new series in the Nitro gaming laptop family, designed to offer a more premium experience compared to the Nitro 5, for the casual gaming crowd.

This new model features a slightly tweaked design, narrow display bezels, and a metal-covered body, which help it stand out from its sibling. With the latest Intel 9th generation Core CPU and Nvidia’s GeForce GTX 16-series GPU on board, does the Nitro 7 offer good bang for the buck? Let’s find out.

The Acer Nitro 7 doesn’t have a flashy design, which is something we really like. The monolithic build looks slick, and the black paint job doesn’t attract smudges very easily. The lid has an aluminium layer, which gives the display some added protection. We noticed some flex in the lid but nothing that caused the display to start warping. You don’t get any backlit logos or RGB LEDs; instead there are some simple glossy diagonal stripes on the lid. The dual-hinge design feels sturdy and the display can extend to about 170 degrees outwards.

The 15.6-inch IPS display has a full-HD resolution (1920×1080) and a 144Hz refresh rate. The model we’re reviewing also has Acer’s ComfyView display feature, which is to say it has a matte anti-reflective treatment which should be less distracting when gaming. We found the brightness to be more than adequate for indoor use. The Nitro 7 also has slim bezels on the left and right of the display, but slightly thicker ones on the top and bottom. We don’t mind this as it means the webcam is in its traditional position, above the display. 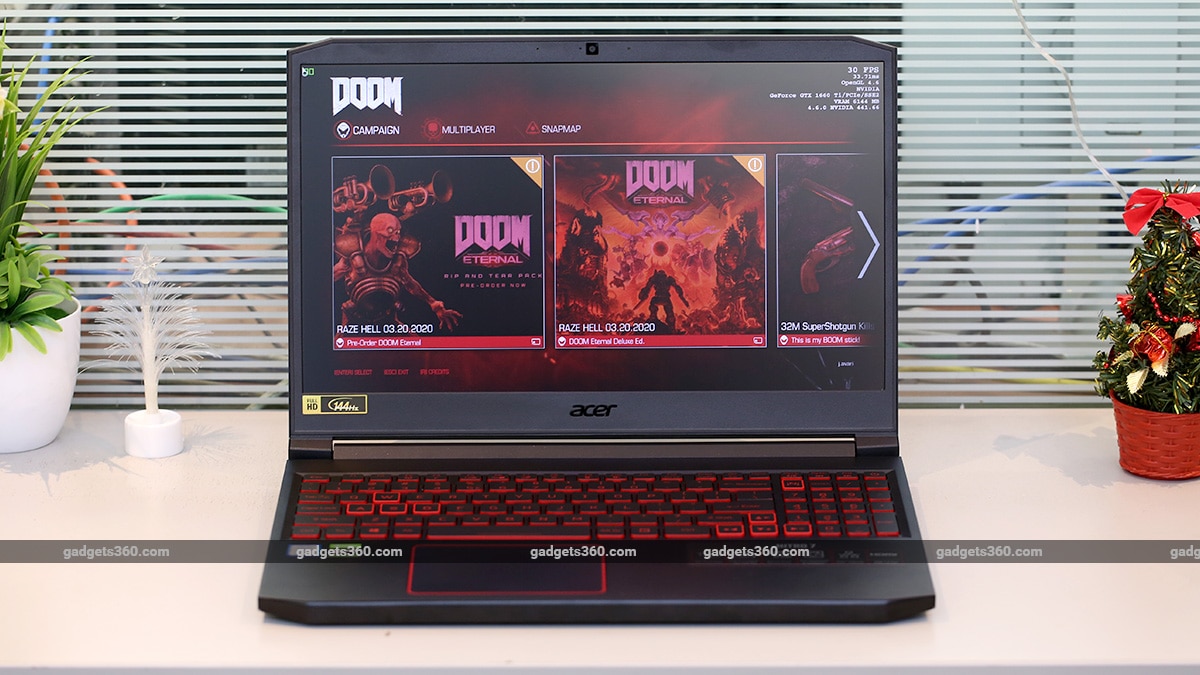 The metal layering extends to the palmrest area, which adds to the premium feel of using this laptop The chiclet-style keyboard keys are well spaced and have good travel, which makes them responsive for typing. They’re aren’t very noisy either, which is something we liked. Acer has managed to squeeze in a number pad, due to which the rest of the keys and trackpad are off-centre. It took a while to get used to this positioning before we could comfortably type at our regular pace. The keys have red backlighting, with four levels of brightness. Some keys such as the WASD and the direction buttons have red borders, to make them stand out from the rest.

For connectivity, the Nitro 7 offers a decent selection of ports. You get three full-sized USB Type-A (2x USB 3.1, 1x USB 2.0) ports and a USB Type-C port (USB 3.1 Gen1). There’s also HDMI 2.0, a Gigabit Ethernet port, a microphone and headphone combo port, and a charging port. The Nitro 7 also has two LEDs on the right, for power and charging status. There aren’t any ports at the back of the laptop, which only features trapezoidal exhaust vents. Surprisingly, there’s no SD card slot, not even a microSD one.

The bottom has more vents and a bunch of thick rubber feet for grip, which also elevate the laptop for better air circulation. The Nitro 7 doesn’t offer easy access to the RAM and storage, so you’ll have to remove the entire base, which is held in place by Philips screws. 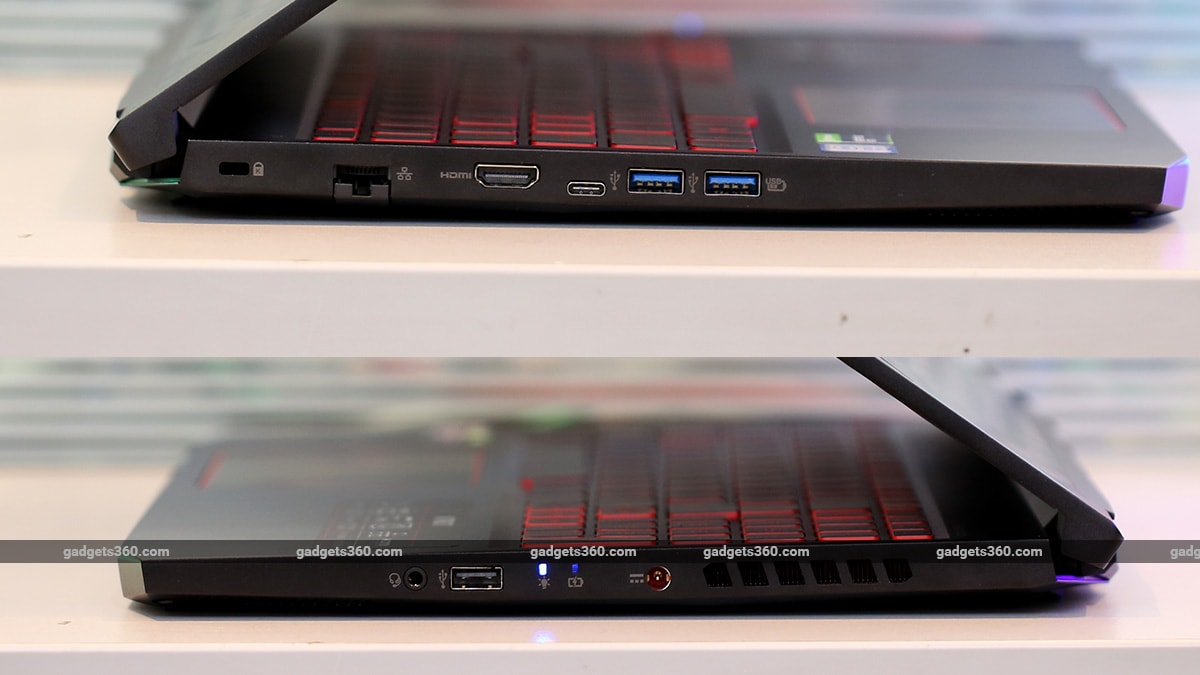 Overall, the Acer Nitro 7 has a cool, understated look which means you could potentially bring it into a workplace without drawing too much attention to yourself. At its thinnest point, it measures around 19mm in thickness but it is on the heavier side at 2.5kg. Thankfully, it is relatively compact for a 15.6-inch laptop, and getting it into a backpack wasn’t any trouble for us. According to Acer India’s website, the Nitro 7 comes with a 1-year International Travelers warranty. In the box, you get a 180W adapter and a user manual.

The Acer Nitro 7 is available in many configurations in India, and the one we have is the top-end variant. This includes an Intel Core i7-9750H hexa-core CPU with HyperThreading, 8GB of DDR4 RAM, 1TB SSD storage (2x 512GB NVMe SSDs in RAID 0), and an Nvidia GeForce GTX 1660 Ti GPU with 6GB of GDDR6 RAM. The laptop has a second free RAM slot, so you can double the amount it ships with. Acer also has some variants in India which have a combination of an SSD and a mechanical drive. On our unit, the 2.5-inch hard drive slot was unused, so you could add a mechanical drive or another SSD for more storage space.

Other specifications include Wi-Fi 6, Bluetooth 5, Gigabit Ethernet with a Killer Networks controller, and an HD webcam. The image quality from the camera is decent under indoor, ambient lighting, but not great. The laptop also features a 4-cell, 55WHr battery, which according to Acer, should be able to deliver a maximum battery life of 7 hours. 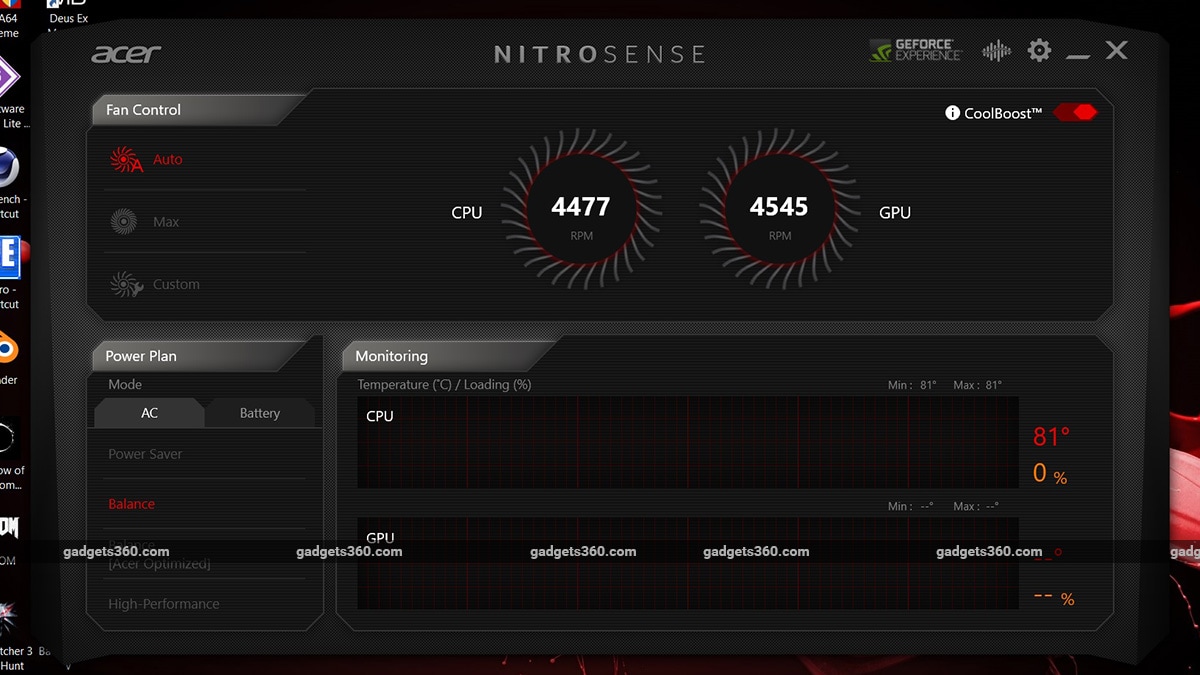 The laptop also boasts of Acer’s CoolBoost technology, which is said to increase fan speed by 10 percent compared to Auto mode. This can be toggled on or off through Acer’s NitroSense software. There’s even a dedicated button in the Number pad area of the keyboard to launch this program. The software looks slick, showing you the fan speeds and temperatures of the CPU and GPU. You can force the fans to spin at their maximum speed or set a custom speed for each fan. You even get shortcuts to launch Nvidia’s GeForce Experience software and switch between audio presets through Acer’s TrueHarmony tool.

The Acer Nitro 7 also features the usual array of first-party apps such as Care Centre for keeping drivers up to date and full versions of software such as Cyberlink’s PhotoDirector and PowerDirector.

For daily usage, the Acer Nitro 7 ran very well. Windows 10 was quick to boot, apps loaded quickly, and the 144Hz refresh rate made everything feel snappy and fluid. The display continued to run at 144Hz by default when on battery power but you can manually change this to 60Hz in the display settings, if needed. The display panel produced good colours and the brightness was more than adequate for indoor use. We often found ourselves setting the brightness level to about 40 percent, which was comfortable for work and gaming.

The Nitro 7 also ran quiet and didn’t get too hot when we weren’t doing anything intensive. Using apps such as a video editor did make the exhaust fans ramp up making them audible, but for simple apps and Internet usage, it behaved like any other slim-and-light laptop.

When we need to put it through its paces, it didn’t disappoint. The top-end spec that we reviewed delivered a very enjoyable gaming experience. The GeForce GTX 1660 Ti offers very good gaming performance at 1080p and had no trouble driving the higher refresh rate display even in some demanding titles. We tried some older games such as Deus Ex: Mankind Divided, which returned a solid 56.8fps with the ‘High’ graphics preset and DX12. Running through the demon-infested alleys of Kadingir Sanctum in Doom was a cakewalk, as the Nitro 7 managed to average around 78fps with the graphics cranked to ‘Ultra.’ 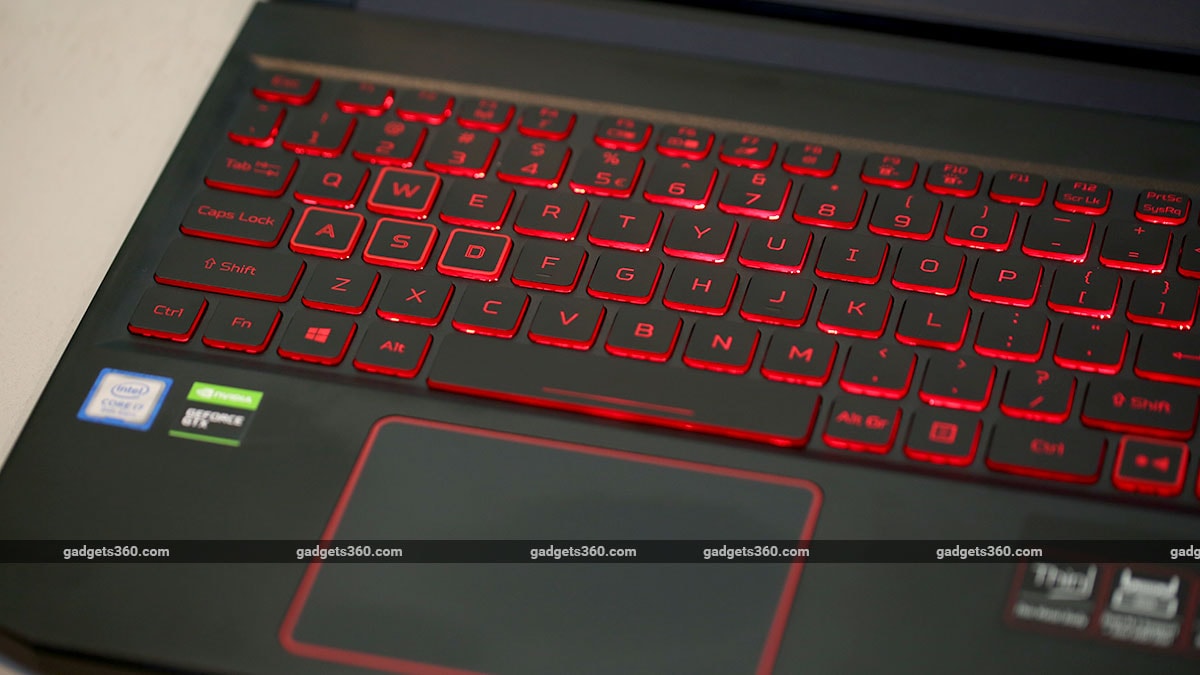 The newer Shadow of The Tomb Raider also ran well, averaging 58fps with all the bells and whistles cranked up. In Far Cry 5, the Nitro 7 averaged 61fps with the ‘Ultra’ graphics preset. Last but not least, Battlefield V also ran well delivering an average of 64fps on the ‘Ultra’ preset. Under load, the exhaust fans were audible, and at times this got a little distracting so we’d suggest wearing headphones while gaming. The area above the keyboard got quite warm but the keys themselves didn’t.

The Nitro 7 posted some good numbers in synthetic tests as well. We got scores of 4,237, 5,570, and 4,627 in PCMark 10’s Standard, Extended, and Express benchmark suites. In Cinebench R20, we got a single-core score of 435 points, while the multi-core score was 2,254 points. SiSoft Sandra’s file system benchmark was especially impressive. We got a sequential read bandwidth of 3.15GBps, which is one of the highest we’ve seen in a while from a laptop. The random read and write bandwidth was in the Gigabit-per-second range too.

Besides games, the Nitro 7 doubles up as a good multimedia laptop too. The stereo speakers are decently loud and the sound signature can be tweaked through the Waves MaxxAudio program. Dialogues are generally clear and the highs don’t sound tinny, but the bass could be a lot better.

Even though Acer claims battery life of up to 7 hours, with the top-end model we had, we realistically managed about 4-5 hours of non-stop usage on a single charge. Keep in mind that this was with fairly light usage, which mostly involved working within the Firefox browser. We had the screen brightness at around 40 percent and the keyboard backlight set at the lowest level. The discrete Nvidia GPU was inactive during this time, since we weren’t running any graphics-heavy apps. We also ran the Battery Eater Pro benchmark and it ran for 1 hour and 49 minutes, which is not terrible, but could have been better. 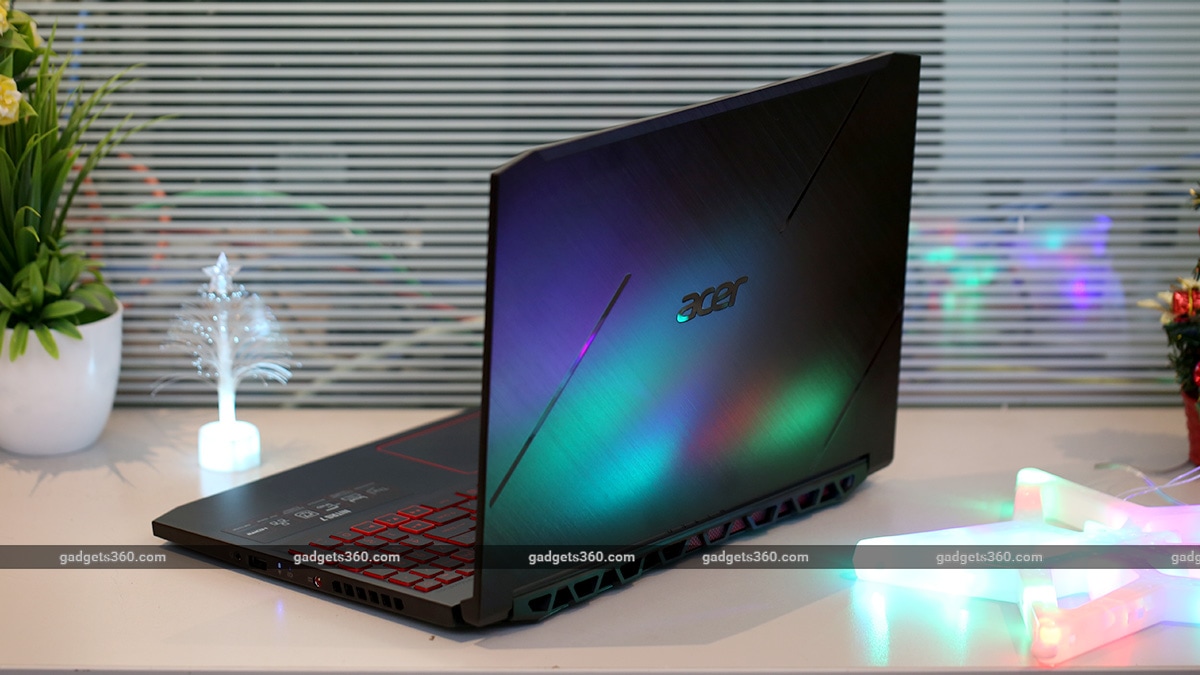 The Nitro 7 is a very nice addition to Acer’s casual gaming laptop lineup. However, since it is positioned as a more premium offering than the Nitro 5, it carries a premium. Prices start at Rs. 84,999, and the fully specced unit that we had carries a retail price tag of Rs. 1,54,999. That’s a little too expensive, since you can find laptops with GeForce RTX-series GPUs for around this much. Thankfully, Acer’s end-user pricing is a lot more competitive. Looking at the company’s own e-store, which was recently launched, this exact variant (AN715-51-76LS) is currently going for Rs. 1,12,999.

The lack of an SD card slot is our only major gripe with the Acer Nitro 7. It’s relatively compact in overall size, but still a little heavy to carry around. Overall gaming performance is good, the high-refresh-rate display looks great, there’s plenty of options to expand the storage and the keyboard is comfortable. The metal covering over the body also gives this laptop a premium feel, making it one of the more polished gaming laptops in its price segment.