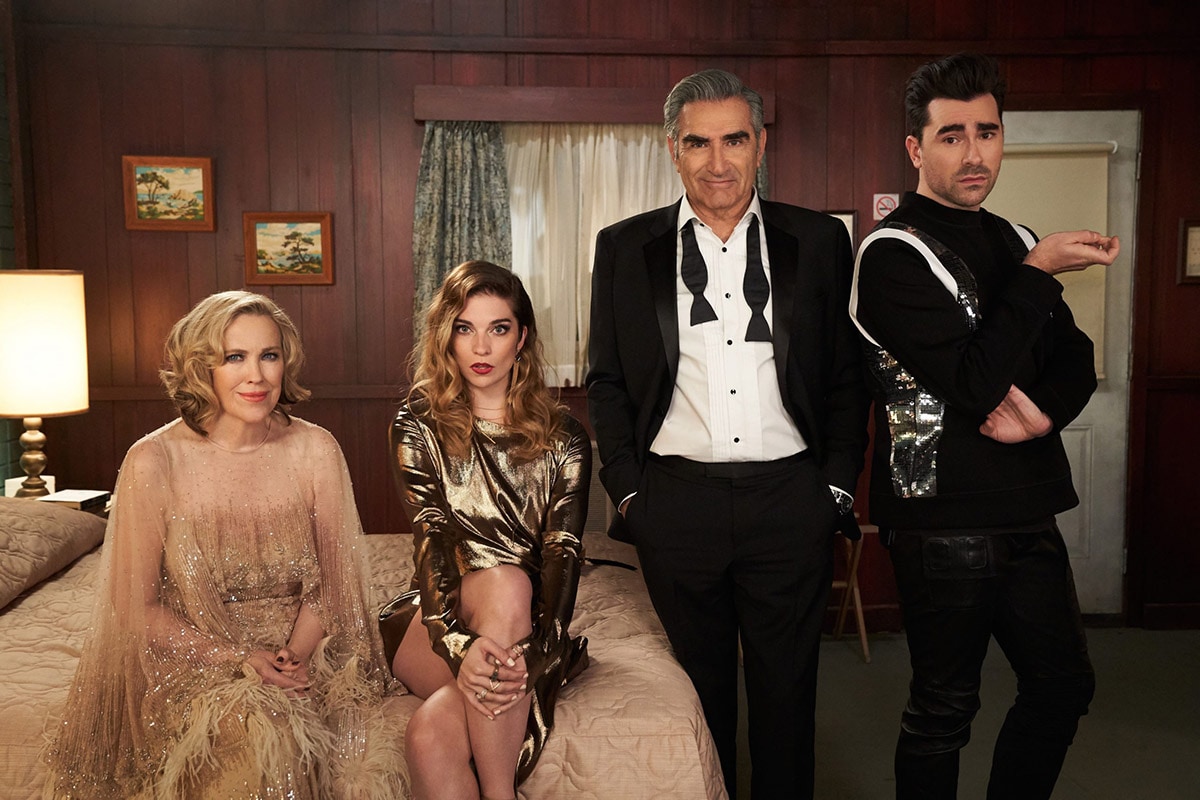 Money Heist season 4 was the highlight for many TV buffs in April, though the series’ future currently hangs in the balance with Netflix non-committal. Locally, that honour went to the Jitendra Kumar-starrer TVF-Amazon collaboration Panchayat, which also hangs in the balance. April also saw the end of the long-running sitcom Modern Family after eleven seasons. That was also true for Schitt’s Creek, though its sixth and final season is only coming to India now in May, on Netflix.

Star Wars, MasterChef AU, Billions, and More on Disney+ Hotstar in May

On the other hand, April also marked the start of Mindy Kaling’s Never Have I Ever, which has been well-received. Speaking of new shows, May brings us several from the creators of The Office, Money Heist, and Bob’s Burgers, the directors of La La Land, and Eat, Pray, Love — in addition to Anushka Sharma and Mark Ruffalo. There’s little in the way of ongoing series in May though, with both Westworld and Better Things an episode away from concluding their season.

Thappad, Jumanji: The Next Level, and More on Prime Video in May

And following in the footsteps of Apple TV+ and Disney+, another new streaming service steps into the ring: HBO Max. Out May 27, it’s got a few originals as well — the Anna Kendrick-starrer rom-com Love Life is the highlight — but unfortunately, HBO Max is US-only at launch. And there are no international plans as yet. With that, here’s our May 2020 TV guide, which includes shows on Netflix, Disney+ Hotstar, Amazon Prime Video, and Apple TV+.

When: May 1
Where: Netflix

Prolific creator Ryan Murphy delivers his second show for Netflix with this seven-episode miniseries set in late 1940s Los Angeles, where it throws a spotlight on “the unfair systems and biases across race, gender and sexuality” that are still present in Hollywood. The ensemble cast — made up of Darren Criss, David Corenswet, Jeremy Pope, Laura Harrier, Samara Weaving, Jim Parsons, and Queen Latifah — play a mix of fictional and real-life people.

Apple’s first international series comes from the UK and is about a couple — played by Rafe Spall (Men in Black: International) and Esther Smith (Cuckoo) — who are trying to have a baby but cannot. Hence, they decide to adopt one. But given their messy lives, crazy families, and dysfunctional friends, will the adoption agency give them the greenlight? A total of eight half-hour episodes. BAFTA winner Imelda Staunton also stars.

When: May 1
Where: Amazon Prime Video

The first of two new shows in May from The Office creator Greg Daniels is set in the near future where people close to death can choose to “upload” themselves to a virtual afterlife. You know, like the Black Mirror episode “San Junipero”, except this is a satirical comedy. The Amazon series follows a dead guy (Robbie Amell, from Code 8) and a customer service rep (Andy Allo, from Pitch Perfect 3) who might be catching feelings for each other — except they are in different worlds, literally.

When: May 4
Where: Disney+ Hotstar

Damian Lewis and Paul Giamatti return for a fifth year to reprise their respective roles of hedge fund manager and US Attorney that are loosely based on real-life figures Steve Cohen and Preet Bharara. The Good Wife star Julianna Margulies and Ant-Man villain Corey Stoll join the cast of Billions season 5, which will pause after seven episodes due to the ongoing coronavirus pandemic that brought a halt to production. The remaining five episodes will arrive later in 2020.

When: May 8
Where: Netflix

The first TV series — a miniseries, to be precise — from Oscar-winning director Damien Chazelle (La La Land) is set in modern-day Paris and follows a failing jazz music club owner (Andre Holland, from Moonlight) whose life changes after he discovers his partner’s questionable business practices and his estranged teenage daughter (Amandla Stenberg, from The Hate U Give) returns to his life. Written by Jack Thorne (Harry Potter and the Cursed Child).

I Know This Much Is True

When: May 11
Where: Disney+ Hotstar

Mark Ruffalo has a twin role in this six-episode miniseries adaptation of Wally Lamb’s 1998 novel of the same name, about two very different brothers: one suffers from paranoid schizophrenia, and the other has had a difficult life as a brother, a husband, and a father. (Ruffalo gained 13 kilos to play the former twin.) Written and directed by Derek Cianfrance (The Place Beyond the Pines), it also stars Rosie O’Donnell, Melissa Leo, Archie Panjabi, Imogen Poots, Juliette Lewis, and Kathryn Hahn.

When: May 12
Where: Netflix

Did you enjoy Black Mirror: Bandersnatch? Well, here’s another interactive adventure for you, one that continues the story of the Tina Fey comedy that neatly wrapped up things early last year. Kimmy (Ellie Kemper) is set to marry a British prince (Harry Potter star Daniel Radcliffe) but she must first foil the Reverend’s (Jon Hamm) evil plot. Or must she? It’s in your hands, after all. A one-off episode as opposed to the regular seasons.

When: May 14
Where: Netflix

After consistently growing from its mediocre start, the Canadian sitcom from father-son duo Dan and Eugene Levy — they also play father and son on the show — ended up as one of the “most beloved comedies”, as one publication put it after its series finale last month. Having wrapped up on Canadian and American TV, the sixth and final season is now headed to Netflix.

For those who haven’t seen a single episode, it’s about a wealthy family — a video store magnate, a former soap opera star, and their two adult children — who lose their fortune and are forced to rebuild their lives in the tiny town they once purchased as a joke gift for the son.

When: May 15
Where: Amazon Prime Video

Anushka Sharma is the executive producer on this neo-noir crime drama that feels like another take on Amazon’s own Mirzapur, as it looks at the dark underbelly that has corrupted the four pillars of Indian democracy and attempts to offer “scathing commentary of modern-day Indian society and politics”. Neeraj Kabi (Taj Mahal 1989), Gul Panag (Dor), and Jaideep Ahlawat (Bard of Blood) lead the cast. Created by Udta Punjab writer Sudip Sharma.

When: May 15
Where: Netflix

From Money Heist creator Álex Pina, a mystery thriller that follows a woman called Zoe Walker (Laura Haddock, from Guardians of the Galaxy) who returns to the Spanish island of Ibiza to investigate her brother Axel’s disappearance after his body is discovered 20 years later. There, Zoe is pulled into a world of endless parties and drugs, where everyone seemingly had a reason to hate Axel.

When: TBA, not before May 18
Where: Netflix

This series reboot of Oscar-winner Bong Joon-ho’s 2013 movie of the same name — which was itself based on the 1982 French graphic novel Le Transperceneige — finally arrives, having been delayed several years due to creative troubles. While it was stuck in development hell, it lost original showrunner Josh Friedman (Terminator: The Sarah Connor Chronicles) and director Scott Derrickson (Doctor Strange).

Orphan Black creator Graeme Manson is now at the helm of the new version, which retains the basic premise: in a post-apocalyptic frigid wasteland, the surviving humans are divided by class aboard a train that keeps circling the globe. Daveed Diggs (Hamilton) and Jennifer Connelly (A Beautiful Mind) lead the cast, which will be bolstered by Sean Bean’s (Lord of the Rings) presence in season 2.

When: May 22
Where: Amazon Prime Video

Singer-songwriter Janelle Monáe takes over from Julia Roberts in the lead role of the second season of this psychological thriller from Mr. Robot creator Sam Esmail, who is also stepping back. (Roberts and Esmail still serve as executive producers.) For what it’s worth, the male lead Walter (Stephan James) and Geist — that’s the company that ran the Homecoming facility — assistant Audrey (Hong Chau) are still around. Chris Cooper (American Beauty) and Joan Cusack (In & Out) also have roles.

When: May 29
Where: Netflix

The Office alums Steve Carell, Greg Daniels, and Howard Klein reunite to give us another dysfunctional workplace comedy, except this one is centred on those tasked with getting the newest branch of the US armed division — the Space Force — off the ground. Carell is both creator and star, and he will be joined on-screen by John Malkovich (Being John Malkovich), Ben Schwartz (Sonic the Hedgehog), Diana Silvers (Booksmart), and Tawny Newsome (Bajillion Dollar Properties), with Jimmy O. Yang (Silicon Valley), Noah Emmerich (The Americans), and Lisa Kudrow (Friends) in supporting roles.

We’ll have a detailed round-up of upcoming TV shows each month, but we do know a little about the future already.

Can Netflix force Bollywood to reinvent itself? We discussed this on Orbital, our weekly technology podcast, which you can subscribe to via Apple Podcasts or RSS. You can also download the episode or just hit the play button below.