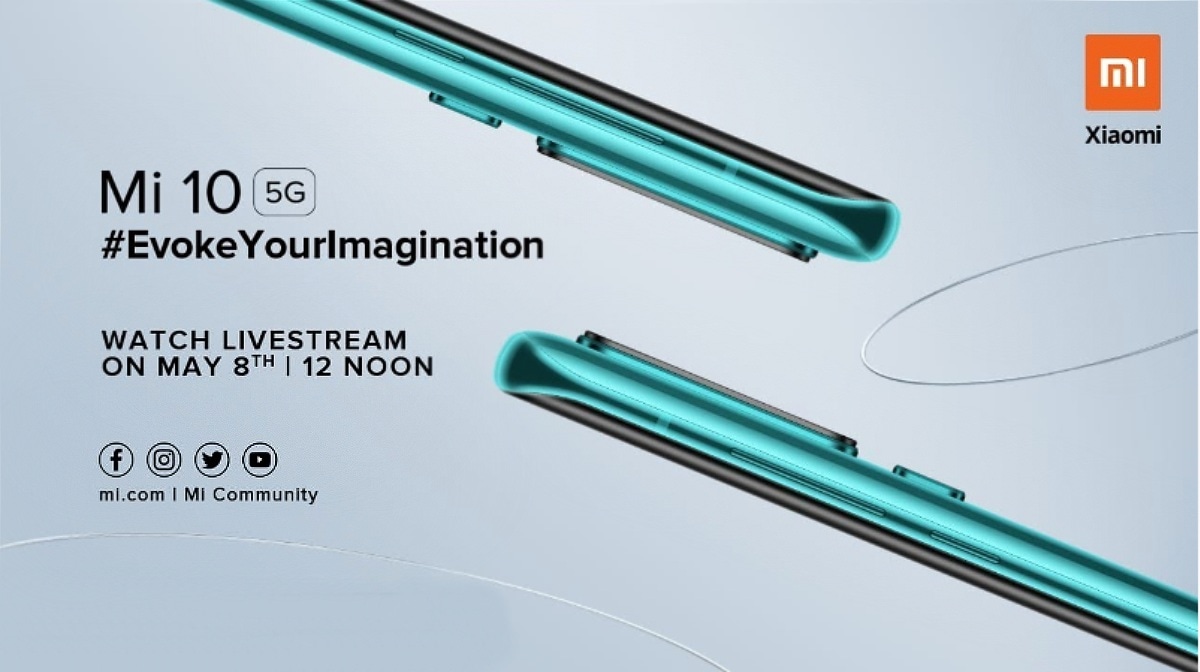 Mi 10 is all set to launch in India today. After many delays due to the coronavirus lockdown in the country, Xiaomi is finally hosting an online event, wherein it will launch the Mi 10, alongside the Mi Box and Mi True Wireless Earphones 2. The Mi 10 has already been launched in China, and it has arrived in a few global markets as well. Now, the company is finally bringing it to the Indian market. Key features of the phone include a 108-megapixel main camera and the Qualcomm Snapdragon 865 SoC.

The Mi 10 launch event will begin at 12pm IST and it will be live streamed on YouTube, Mi.com, Mi Community and via the company’s social handles. Alongside the Mi 10, Xiaomi has already confirmed the launch of Mi True Wireless Earphones 2 and Mi Box. The Mi 10 has already been listed on Amazon India, and the company notes that pre-orders will begin at 2pm IST today and last till May 17. Customers who pre-order the Mi 10 will get a free Mi Wireless Powerbank worth Rs. 2,499. You can watch the Mi 10 launch event live stream in the embedded video below.

Xiaomi looks to unveil the price of Mi 10 at the launch event today. Xiaomi India Managing Director Manu Kumar Jain has earlier noted that the pricing in India will be calculated differently than China. This is because of factors like direct import, recent GST hike, and depreciating rupee. To recall, the Mi 10 was launched in China with a starting price of CNY 3,999 (roughly Rs. 42,800).

The Mi 10 has a hole-punch display, a quad camera setup at the back, and an in-display fingerprint sensor. As for specifications, the Mi 10 runs on Android 10-based MIUI 11. It features a 6.67-inch full-HD+ (1,080×2,340 pixels) curved AMOLED display with 90Hz refresh rate. The phone is powered by an octa-core Snapdragon 865 SoC, paired with up to 12GB of RAM. There is up to 256GB of onboard storage on the phone.

As mentioned, the Mi 10 has a quad rear camera setup with a 108-megapixel primary sensor. It is accompanied by a 13-megapixel wide-angle lens, and two 2-megapixel cameras. The smartphone also comes with a 20-megapixel selfie camera. The Mi 10 packs a 4,780mAh battery that supports 30W wired charging and 30W wireless charging.

Xiaomi has teased the launch of a new IoT product – Mi Box – in India, alongside the Mi 10. A dedicated Xiaomi webpage teases features, and it is expected to come with 4K support, Chromecast support, and will feature Dolby Audio as well. The Mi Box will be bundled with a Voice Remote and offer a large number of OTT apps like Voot, Netflix, Disney+ Hotstar, Zee5, Amazon Prime Video, Sun NXT, Alt Balaji, and more. Details regarding the price, availability, and detailed features of the Mi Box will be outlined at the event today.

Jain took to Twitter recently to announce that the Mi True Wireless Earphones 2 will be launched alongside the Mi 10. These true wireless earphones were launched globally in March this year at EUR 80 (roughly Rs. 6,600). India price will be detailed at the event, but it should most likely be somewhere around the same price tag as the Realme Buds Air which are priced at for Rs. 3,999.

Mi True Wireless Earphones 2 looks to be inspired by AirPods. They come with a charging case and the teaser shows a white colour option in the offing. It will support Bluetooth 5.0 and the LHDC Bluetooth codec, which is an uncommon competitor to Qualcomm’s aptX and Sony’s LDAC Bluetooth codecs. The earbuds feature 14.2mm drivers along with a large composite dynamic coil, and Xiaomi has integrated ENC for noise cancellation as well.

The Mi True Wireless Earphones 2 global model is rated to deliver four hours of battery life on a single charge, while the charging case expands the battery life to 14 hours.

How are we staying sane during this Coronavirus lockdown? We discussed this on Orbital, our weekly technology podcast, which you can subscribe to via Apple Podcasts or RSS, download the episode, or just hit the play button below.