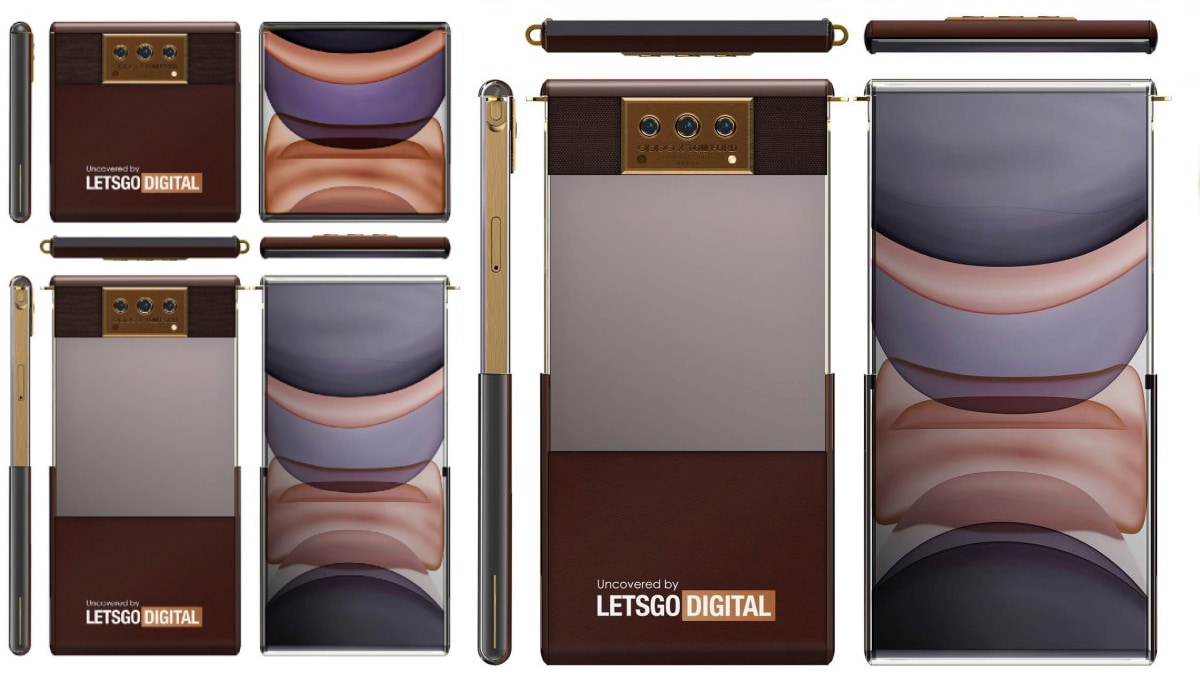 Oppo X Tom Ford slider smartphone, a new rollable smartphone concept, has leaked in images. In the images, the phone is seen to have a pull-up display panel that rolls in and out like a scroll. This hints that the company may be working on multiple concept phones with rollable displays. Last month, the company introduced the Oppo X 2021 concept phone that extended out from the side. The new leaked model rolls up and down in a more pocket-friendly design.

LetsGoDigital has shared renders of the Oppo X Tom Ford slider smartphone concept, that it says have been obtained from company documentation. When not rolled out, the smartphone is a small, squarish device that should fit into your pockets easily. As mentioned, the screen can be pulled out from the top edge, making it taller upon retraction. The report says that the display area increases by about 80 percent when pulled out. The edges of the screen are rounded and the phone has two golden pull tabs on the sides for easy rolling of the screen and can even be hung around the neck, according to the report.

There’s a triple camera setup seen at the back with the sensors aligned horizontally in the top centre of the module. The back seems to have a soft leather finish, but the space around the camera has a wood grain structure, and the words “Oppo X Tom Ford – Design for concept Shakira” engraved below the sensors. It is seen to have a metal frame with the SIM tray integrated in to the right edge. Strangely, there is no front sensor noticed anywhere and it remains to be seen how the company looks to integrate the selfie functionality into the phone. Perhaps, when you roll out the phone, the extended back portion could house a second screen that may be used for selfies and video calls. There could also be an in-display camera. But since the phone is a concept, its mechanics can only be speculated.

There is no clarity if Oppo will unveil the Oppo X Tom Ford slider concept phone commercially.

Which is the best TV under Rs. 25,000? We discussed this on Orbital, our weekly technology podcast, which you can subscribe to via Apple Podcasts, Google Podcasts, or RSS, download the episode, or just hit the play button below.