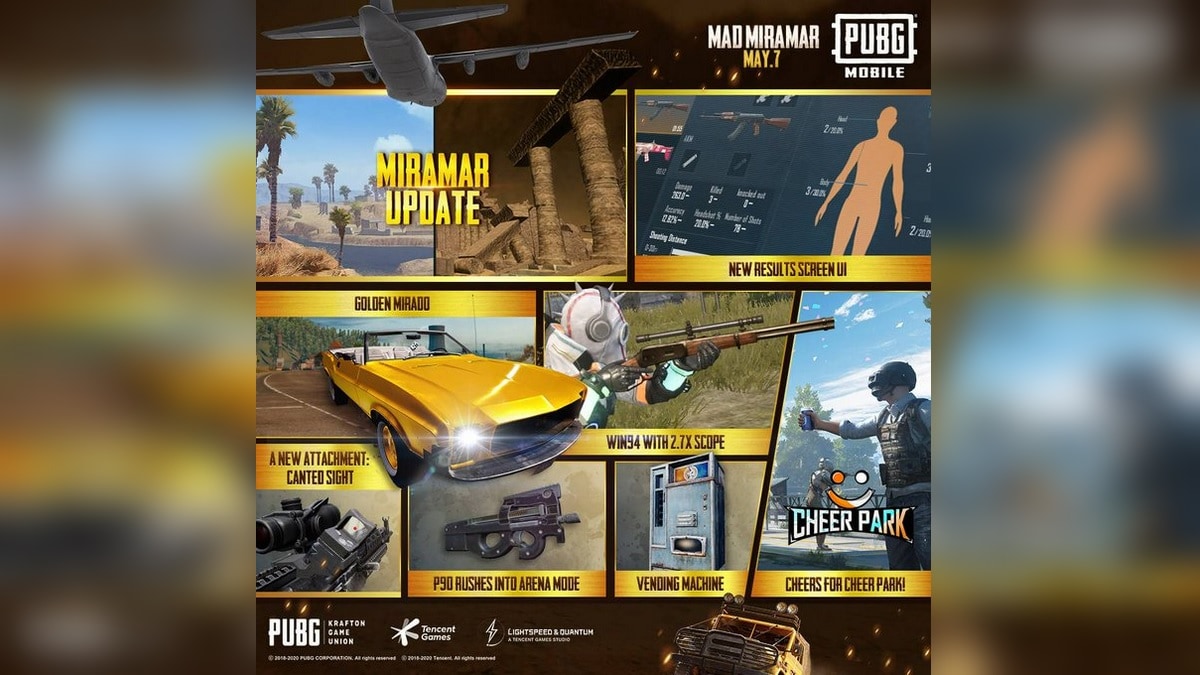 PUBG Mobile 0.18.0 has been released after weeks of teasers on social media. It brings a lot of new features and changes to the highly popular game. PUBG Mobile’s Miramar map has received some new changes with a new landscape, housing areas, roads, and resources. There is a new weapon, UI changes, new currency, and skins, added with the latest update. Additionally, the 0.18.0 update brings the new Royale Pass Season 13, which will be available from Wednesday, May 13.

The Miramar map in PUBG Mobile has an all-new landscape with fresh housing areas, roads, and resources. The developers added two new areas called Oasis and Urban Ruins as well. There is a new race track on the map along with a new vehicle called Golden Mirado. This vehicle only spawns in one location of the map. Another addition is vending machines allowing players to collect Energy Drinks and Painkillers.

Other additions to Miramar include Lingering Sandstorm Effects that bring random sandstorms to the map, new achievements, special events, and a new main menu theme.

Royale Pass Season 13, as mentioned before, will be added to the game on May 13. It will have the theme ‘Toy Playground’ with players getting a choice between Level 50 Captain Hawk and Level 50 Fire Ranger. There will be a Level 100 Ultra Defender and Puppet Agent outfit in Season 13 as well.

The company says players will be able to “customise the color, patterns and emblems of their weapons after obtaining them.” The new Emblem editor will enable further customisation. “Graffiti can also be exchanged for Guncraft stickers and applied to weapons as a finish,” the company states. This feature does not have a release date as of yet.

Cheer Park will be a new social area where up to 20 players can interact in real-time. Like the Training Grounds, players can practice their skills here. They can also team up and visit the Shooting Range or play the new game modes – Duel and Hunt.

Other changes and additions

The 0.18.0 for PUBG Mobile brings a new results screen UI and a new currency called ‘AG (AceGold) currency’, which replaces all Silver rewards. Also new is the P90 SMG, with single shot, burst, or fully automatic fire modes. Almost all weapons can now be equipped with new canted sights. PUBG Mobile also states it has made several bug fixes to the game as well.

More information on Jungle Adventure Guide, Bluehole Mode in EvoGround, and more is expected soon from the company. The free-to-play game can be downloaded from the Play Store or the App Store.