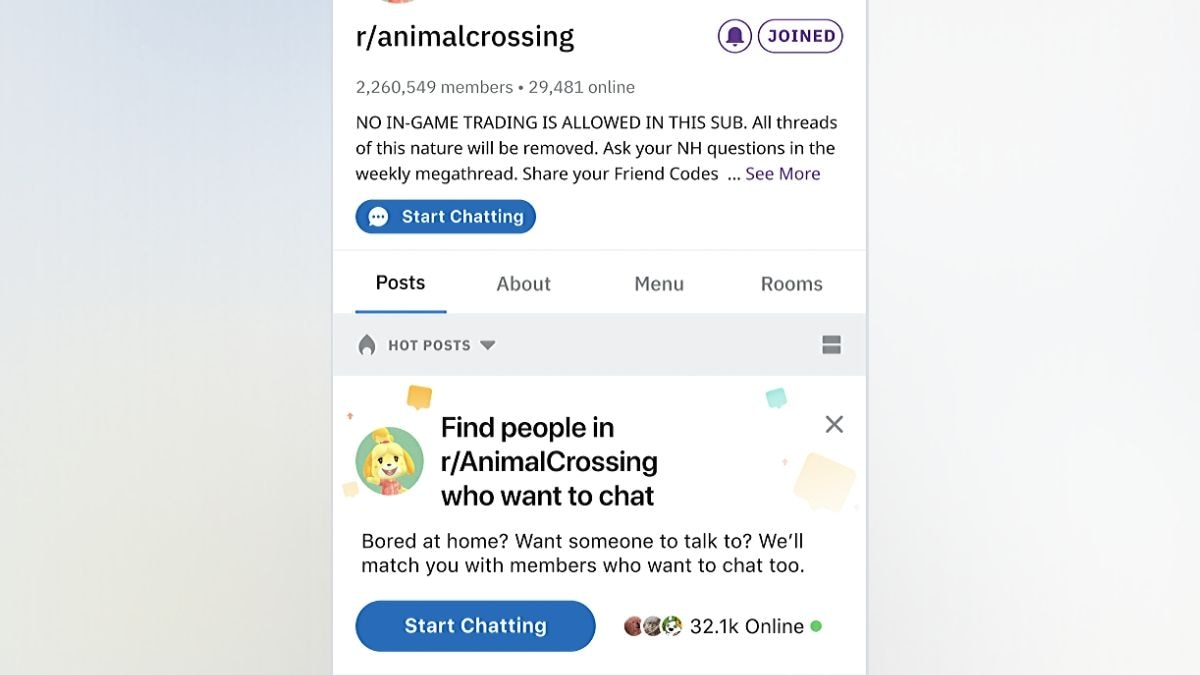 Reddit is rolling out a new feature that lets users engage in private group chats with each other. Reddit is a discussion forum made up of many different communities called subreddits. The new feature, named “Start Chatting”, randomly sorts users from a subreddit into a private group chat, where they can, well, start chatting! Reddit announced that this feature is currently being rolled out to 50 percent of the subreddits, and will be available to others in the coming weeks. Notably, the development comes at a time when several social media platforms are witnessing a surge in users, as people are heavily using these tools to communicate amid coronavirus pandemic.

However, it is unclear whether the new feature is also coming to the Web client of the platform. Gadget 360 was able to verify the presence of the “Start Chatting” button on a community while using the mobile app. A Reddit employee confirmed on the site that “Start Chatting is an extension of our 1:1 and group chat features, which allows users to connect over shared interests in a more intimate format. A key differentiator with Start Chatting is that it directs users to a randomly generated chat room with a handful of others and is community-themed. Subreddit Chatrooms are extensions of individual communities with generally a much larger group of users participating.”

According to Reddit Help forum, Start Chatting feature “matches” users with “other redditors who have similar interests.” To use the feature, users will need to visit a community page that has the feature enabled. Upon opening the community page, users will see a button labelled as “Start Chatting” beneath the community’s description. After clicking the button, users will be randomly matched with other users who are part of the particular community. Reddit stated that during the testing, the company noticed an “interesting use cases for Start Chatting”, as people started discussing “cliffhangers” from the latest TV episode or “finding others to game with online.”

Reddit Vice President of Product and Community, Alex Le, wrote on the site that the Start Chatting feature was created as a “response” to the global coronavirus pandemic. “Many of us are sheltered at home looking for ways to reach out to others, and our hope is that this will become a fun way for people to find other like-minded people on Reddit and make new friends that share their interests,” Le said.

Reddit in its Help forum also outlined measures in case users are being harassed by others in an individual or group chat. The company notes that users can report an offensive message, block the user, or “leave the chat.” Speaking more about this, a Reddit employee told The Verge that chat rooms will be moderated by Reddit admins. “We have a number of safety tools built into the feature and have integrated our general reporting flow, so users can report any messages or policy-violating content within the group chat,” the spokesperson said.

Unlike many other social media platforms which run in a centralised manner, works with a combination of Admins (employees) and Mods (volunteers) — and it’s the mods who manage and maintain the communities on the site. This means that while Reddit may set overall policies, it’s up to the mods to enforce them, and they play a critical role in the functioning of Reddit. Interestingly, on the post announcing the rollout of the Start Chatting feature, many mods have been calling for the ability to disable this on their subreddits. This is clearly not something Reddit was expecting, because in his reply Le merely said, “We will also build an opt-out, allowing you to remove this banner from your communities if you think that’s appropriate.”

However, he added that Reddit’s early tests were quite positive, with a rate of only 1 in 10,000 reports, but he also wrote, “If we got it wrong and the abuse becomes unmanageable, or the mod workload becomes too burdensome, we will work with you to fix it.”