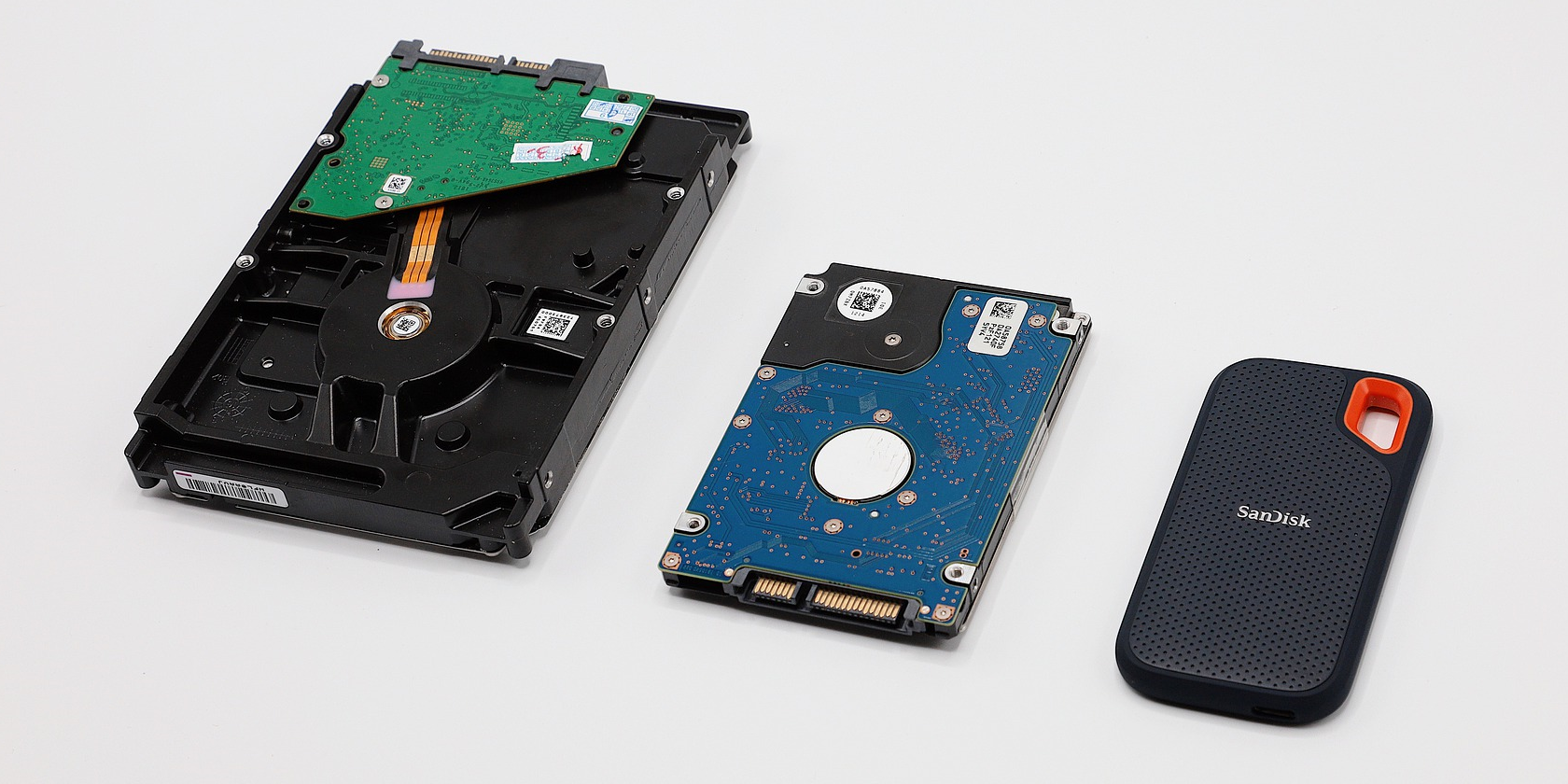 If you’re looking to purchase a new computer or laptop or want to upgrade your existing machine, you’re probably going to come across HDD and SSD hard drives in your research.

Newer PCs and laptops tend to now come with SSDs as a preference, but budget models may still favor HDDs. There are advantages and disadvantages to both; while their physical features may be similar, the way they write and store data is very different.

What Is an HDD?

HDD stands for Hard Disk Drive. HDDs have increased in storage capacity and decreased in size over the years. However, they still rely on spinning disks to read data.

A traditional HDD can store an operating system, applications, and files, with a circular disc known as a platter which stores the data.

If you have an HDD in your computer or laptop, you can probably hear the platter spinning as you load multiple applications, making your device work harder.

Most modern HDDs use a SATA connection to connect to a computer’s motherboard, with the latest SATA III connection enabling the fastest data transfers available for an HDD.

What Is an SSD?

A solid-state drive (SSD) is newer than HDD technology, but it’s still been around for some time and isn’t the newest storage technology available.

Unlike HDDs, SSDs contain no moving parts and instead uses NAND flash memory. When they were first released, SSDs struggled to keep up with HDDs in terms of storage capacity. However, with more NAND memory chips being available, SSDs can compete with HDDs.

Similar to modern HDDs, SSDs come with SATA III ports, so they can easily replace an HDD and are often smaller in physical size. SATA III has a maximum data throughput of 600MB/s. Commonly you’ll see some of the best SATA III SSDs with read speeds of around 550MB/s like this Samsung 860 EVO. While this kind of speed works well for HDDs, SSDs can handle much faster speeds.

To rectify this, SSDs were created with PCIe connections, allowing a connection directly to the motherboard with much faster speeds. But, if you have a motherboard with fewer PCIe lanes for use with other devices, you may decide to connect a graphics card in favor of an SSD.

Modern PCs and laptops are now using M.2 SSDs, which are typically smaller than SSDs. Newer motherboards with M.2 ports allow your SSD to be connected to your motherboard while making room for other components without having to sacrifice your SSD.

The latest SSD technology is NVMe, which offers some of the fastest data transfer speeds available. But, of course, it comes at a much higher price. To put this into perspective, the Samsung 970 EVO Plus offers read/write speeds up to 3,500/3,300 MB/s.

Related: Should You Upgrade to NVMe?

An SSD is around four times faster than an HDD when it comes to read speed and slightly less when comparing write speed. However, using a more compatible SSD interface like PCIe can offer an even higher data rate.

Average speeds for PCIe and M.2 SSDs are around 1.2GB/s to 1.4GB/s and, in some cases, can reach 2.2GB/s if you can afford the extortionate cost.

Many people opt to put their operating systems on an SSD due to their superior performance. System boot speeds are much quicker compared to storing an OS on an HDD.

It wouldn’t be unreasonable to expect an improvement in boot speed of 200% – 800%, which results in Windows booting up in around 20 seconds. Compare this to an HDD of around 40-60 seconds, and you can see there’s a big difference.

If money was no object, SSDs could get up to 10 times faster speeds than HDDs, so they are the clear winner in terms of speed and performance.

HDD storage can range anywhere between 40GB to 12TB for general commercial use. Enterprise use can reach even higher storage capacities, but in most cases, you can get hold of a good value for money HDD with 2TB storage.

If you need to store a lot of data, it’s recommended to have multiple hard drives with smaller storage capacities, rather than putting all of your eggs into one basket and relying on one hard drive. If your hard drive fails or becomes corrupt, you could lose all your data, but if you save your data across multiple hard drives, you won’t lose it all.

HDDs are good for holding a lot of data, especially videos, photos, and games. However, due to their slower read and write speeds, they won’t perform as well as an SSD. So, you could store the majority of your games on an HDD but store your favorite and most power-hungry games on your SSD.

SSDs were only available in smaller capacities and were often saved for operating systems, which took up less space than thousands of files, games, and media. However, you can now get SSDs with terabytes worth of storage, though they tend to be more expensive.

One of the big differences between SSDs and HDDs is their cost. SSDs tend to be more expensive than HDDs per gigabyte, but there are specifications to take into account too.

SATA III SSDs are often cheaper than M.2 and PCIe SSDs because they contain older technology. However, you could pick up a SATA III SSD for a similar price to a traditional HDD.

If you’re purely after storage capacity, HDDs are cheaper overall, and you’ll be able to get a lot for your money. However, if you weigh up whether to buy an SSD or HDD for your operating system, you can easily pick up a 256GB SSD for a similar price to an HDD, but the specs will be a lot better.

SSD vs. HDD: Types of User

Whilst it’s easy to compare SSDs and HDDs in terms of technical specifications and performance, it’s often simpler to be able to make reference and relate to the type of user you are to decide whether an SSD or HDD is right for you.

The Future of Storage

With plenty of storage options being available, including cloud storage, it’s hard to predict whether SSDs will replace HDDs in their entirety.

SSDs are still expensive compared to HDDs if you’re looking to replace terabytes of data on your PC or laptop. For some users, they simply need a lot of storage space; it doesn’t need to be fast or quiet. It just needs to exist.

However, the prices of SSDs are coming down, and it’s becoming easier to afford a decent SSD with a lot of storage space compared to 5 years ago. SATA III SSDs will undoubtedly become cheaper as newer SSD technology emerges.

How to Organize Windows Files Using Both an SSD and HDD

You probably know that a solid-state drive (SSD) is a huge upgrade for your computer because it runs much faster than a mechanical hard disk drive (HDD). However, since SSDs are more expensive, you mi…

Georgie is a freelance content writer with 10+ years’ experience. She has a hunger for all things tech and enjoys creating content that can help and inform others.