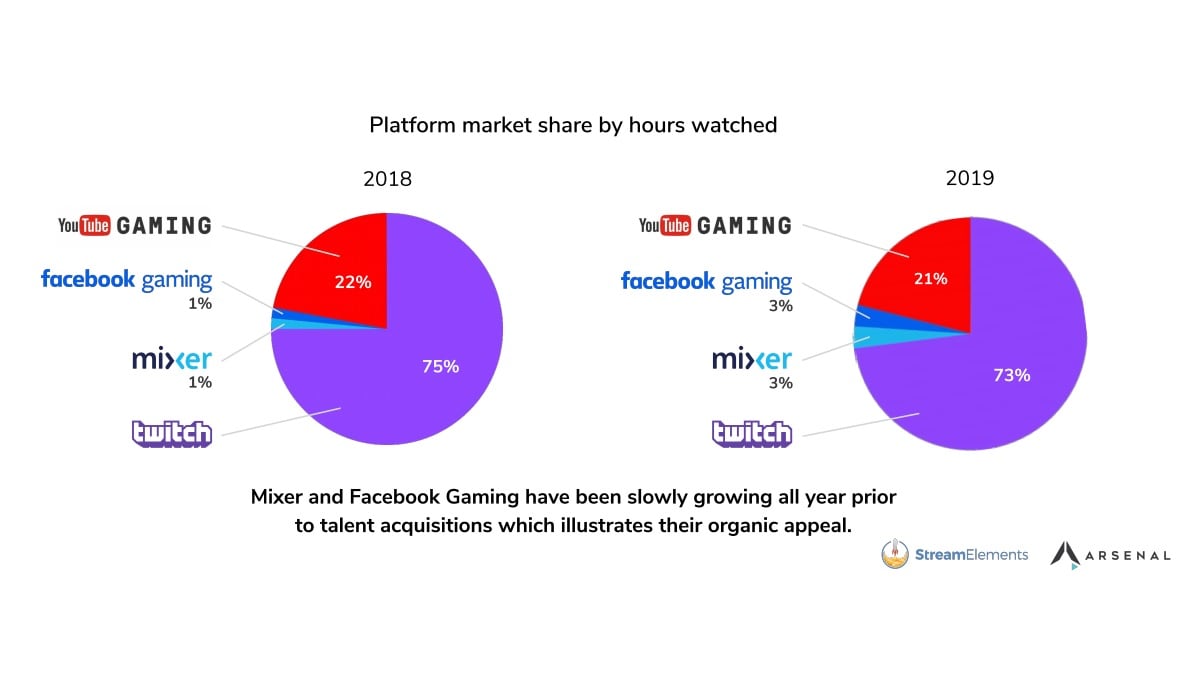 2019 was a great year for streaming, and while Twitch continues to rule the roost when it comes to platforms, rivals such as YouTube Gaming and Mixer nibbled at its market share. As per the State of Stream report for 2019 by Stream Elements, Twitch still commands a 73 percent share of the streaming market, but it saw a 2 percent decline this year. League of Legends took back the crown of most popular game on Twitch in terms of hours watched, while Fortnite took the second place in 2019 after topping the charts last year. Tfue emerged as the top streamer of Twitch in 2019, while old classics such as World of Warcraft and Dungeons & Dragons saw a revived interest.

Stream Elements’ latest State of the Stream report says that the big four streaming platforms recorded a steady growth this year in terms of viewership hours. Twitch’s viewership went up by 20 percent to 9.34 billion hours, while Mixer and Facebook Gaming recorded a huge YoY growth of 149 percent and 210 percent respectively.

Overall, Twitch still commands a lion’s share of the streaming market at 73 percent as of 2019, which is 2 percent lower compared to last year. All three key rivals grew at Twitch’s expense, with YouTube Gaming now commanding a 21 percent market share, while Facebook Gaming and Mixer end the year at 3 percent market share each.

Talking about streaming personalities, Fortnite player Tfue was the No. 1 streamer on Twitch in 2019 with over 87.78 million viewership hours. Esports biggie Shroud took the second spot (Twitch + Mixer combined), followed by summit1g (Twitch only), Ninja ((Twitch + Mixer combined), and Asmongold (Twitch only). Saddummy was the top female streamer on Twitch in 2019, trailed by Amouranth, and itsHafu.

League of Legends recorded a 7 percent surge in viewership hours in 2019, making it the top game on Twitch this year with over 990 million hours of viewership. Fortnite was positioned at second spot after topping the charts last year, while Just Chatting was at the third rank. GTA 5 saw a 277 percent annual growth and took the fourth spot, while DOTA 2 was ranked fifth.

When it comes to new games released in 2019, Apex Legends led the pack, followed by Teamfight Tactics, Sekiro: Shadows Die Twice, Death Stranding, and Anthem. Just Chatting, a live vlogging category which is technically not a game, saw a remarkable 44 percent growth on a platform that primarily caters to gaming.

A surprising trend in the world of streaming this year was growing interest in classics. Viewership hours of Dungeons & Dragons increased by 26 percent in 2019, while World of Warcraft Classic’s launch also sparked a revived interest in the franchise. Another oldie that witnessed a huge growth spike was GTA 5, whose viewership hours went up by 277 percent on a YoY basis.