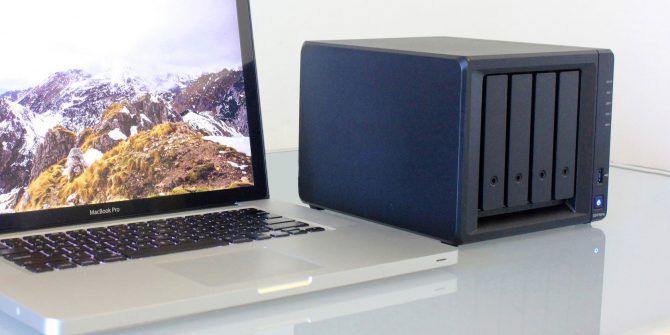 A NAS, or Network Attached Storage, allows you to access your files from any computer or mobile device, as long as it’s connected to the same network. Fundamentally, a NAS connects multiple storage devices (such as hard drives) to a network.

What Is a NAS?

Think of a NAS in the same vein as a cloud storage solution like Google Drive or Dropbox, but hosted under your roof instead. The storage pool is separate from your devices and can be accessed simultaneously by multiple devices and users. Furthermore, even if your computers experience issues, your files will remain accessible to other devices on the network.

With the right network configuration, you can even make a NAS accessible via the internet to make your own cloud storage server.

Why Should I Get a NAS?

There are several reasons why you might want to own and operate a NAS in your home. Say, for instance, you need to regularly backup photos from a couple of smartphones and a camera.

A traditional workflow for image backups is to connect each device to a computer and copy the files over. When someone in the family requests a copy, you would have to connect their storage devices to the same computer or use an online service like email.

While the above is fine for infrequent transfers, a NAS can vastly improve this routine. For one, it eliminates the reliance on your home PC. Secondly, it also offers automated backup and wireless transfer options to simplify the entire process.

Collaborative tasks such as document and video editing also benefit from a NAS. If each user had their own copy of the file, any changes made to it would not be synced to other collaborators. However, working directly off your NAS storage alleviates this issue since all users are accessing the same copy.

The kind of NAS you should get depends almost entirely on your use case and budget. If you’re running a small business, for example, you might want to get a NAS with fail-safes and redundancy built-in. Larger organizations may even want to build their own storage server from scratch, tailored specifically to their needs.

If you’re an average home user that is just starting out, the chances are that an off-the-shelf solution will suit your requirements. Still, the number of NAS options on the market can be overwhelming.

So what should you pay attention to when shopping for a NAS?

Disk-Included vs. Diskless NAS: Which Should You Choose?

Seagate and Western Digital, two of the world’s largest storage drive manufacturers, sell NAS with pre-installed disks. Since they include everything you need to get, there’s minimal setup involved. Buy an off-the-shelf solution, supply it with power and a network connection, and follow the on-screen instructions. These devices are commonly accompanied by a mobile app as well.

The downside to these ‘disk included’ devices, however, is that you may be locked into the respective company’s hardware and software ecosystems. For instance, some Western Digital My Cloud devices require you to have a working internet connection to set up the NAS for the first time. This can be a deal-breaker if you’re looking for a completely offline device.

Furthermore, pre-populated NAS setups tend to be more expensive in terms of upkeep. Their closed nature means that you usually cannot replace the drives within them at all—making the outer enclosure pretty much useless in the event of a disk failure.

If you’d rather be brand agnostic and purchase your disks separately, consider a diskless NAS instead. While this approach does require some initial setup, it can offer a virtually unlimited amount of flexibility in terms of both hardware and software. Diskless NAS solutions are typically sold in various bay configurations, too, allowing you to add exactly as many drives as you need.

Synology is the most well-known manufacturer of diskless NAS devices, by far. Other brands that offer diskless options include QNAP, Netgear, and Asus. While diskless NAS options typically cost more than a pre-populated NAS, you’re essentially paying for a fully-featured computer. In other words, they’re usually cheaper to operate in the long term—especially since they can survive numerous disk swaps in the future.

Many diskless NAS also contain a full-blown operating system. On Synology devices, for instance, this means that you can install various supported applications on top of the traditional file transfer functionality. This includes a mail server, surveillance system, and even a video streaming server.

Diskless devices will typically require you to manage them via a web browser. Still, they’re pretty easy to configure these days.

Synology-branded NAS devices ship with the company’s DiskStation Manager operating system, for example. The brand even offers a simulated experience of the OS on its website for you to trial.

If you already have several external hard drives on hand, you also have the option of building your own NAS.

Many high-end (and even mid-tier routers these days) include a USB port on the back. If yours does, getting a NAS up and running could be as simple as connecting a hard drive to the back of your router. From there, open up your router administration page and enable its file server functionality.

On Netgear routers, for instance, this functionality is called ReadySHARE. Other popular brands, including TP-link and D-link, also offer the same feature under their own branding.

Since routers typically only have one USB port, you will only be able to connect one hard drive. Furthermore, the underpowered nature of most networking devices means that they will be unable to offer additional features such as routine backups.

DIY NAS: Use a Raspberry Pi

Another low-cost option would be to use a Raspberry Pi as your NAS. Since the Pi is essentially a low-cost, low-power computer that can run Linux, it has several use cases – including serving as a NAS.

A Pi-based NAS may have a few downsides, including USB and network bottlenecks. However, if you only plan to connect one or two drives and don’t need blazing-fast transfer speeds, it is good enough.

Since the Pi is a fully-fledged computer, it can host many different services, which is similar to Synology’s offerings. The only limitation is the amount of CPU power and memory on board. The community also maintains an exhaustive list of services you can install on your self-hosted NAS.

Setting Up a NAS Is Simple

Whether you use an existing router or a Raspberry Pi, both options are solid stepping stones to full-fledged NAS offerings. They can also serve you indefinitely if you only have modest storage needs.

The 4 Best NAS for Home Media Servers and Shared Storage

We tell you what to look for in a NAS to get the best media server and recommend a handful of the best NAS devices to get you started.