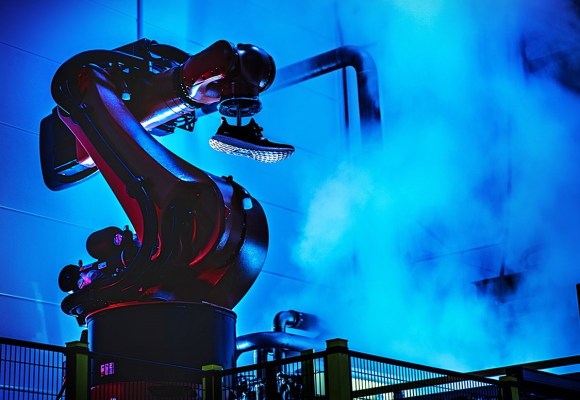 An expensive experiment in global distribution has been abandoned by Adidas, which has announced that will close its robotic “Speedfactories” in Atlanta and Ansbach, Germany, within 6 months. The company sugar-coated the news with a promise to repurpose the technology used at its existing human-powered factories in Asia.

The factories were established in 2016 (Ansbach) and 2017 (Atlanta) as part of a strategy to decentralize its manufacturing processes. The existing model, like so many other industries, is to produce the product in eastern Asia, where labor and overhead is less expensive, then ship it as needed. But this is a slow and clumsy model for an industry that moves as quickly as fashion and athletics.

“Right now, most of our products are made out of Asia and we put them on a boat or on a plane so they end up on Fifth Avenue,” said Adidas CMO Eric Liedtke in an interview last year at Disrupt SF about new manufacturing techniques. The Speedfactories were intended to change that: “Instead of having some sort of micro-distribution center in Jersey, we can have a micro-factory in Jersey.”

Ultimately this seems to have proven more difficult than expected. As other industries have found in the rush to automation, it’s easy to overshoot the mark and overcommit when the technology just isn’t ready.

Robotic factories are a powerful tool but difficult to quickly reconfigure or repurpose, since it takes specialty knowledge to set up racks of robotic arms, computer vision systems, and so on. Robotics manufacturers are making advances in this field, but for now it’s a whole lot harder than training a human workforce to use standard tools on a different pattern.

In a press release, Adidas global operations head Martin Shankland explained that “The Speedfactories have been instrumental in furthering our manufacturing innovation and capabilities,” and that for a short time they even brought products to market in a hurry. “That was our goal from the start,” he says, though presumably things played out a bit differently in the pitch decks from 2016.

“We very much regret that our collaboration in Ansbach and Atlanta has come to an end,” Shankland said. Oechsler, the high-tech manufacturing partner that Adidas worked with, feels the same. “Whilst we understand adidas’ reasons for discontinuing Speedfactory production at Oechsler, we regret this decision,” said the company’s CEO, Claudius Kozlik, in the press release. The factories will shut down by April, presumably eliminating or shifting the 160 or so jobs they provided, but the two companies will continue to work together.

The release says that Adidas will “use its Speedfactory technologies to produce athletic footwear at two of its suppliers in Asia” starting next year. It’s not really clear what that means, and I’ve asked the company for further information.