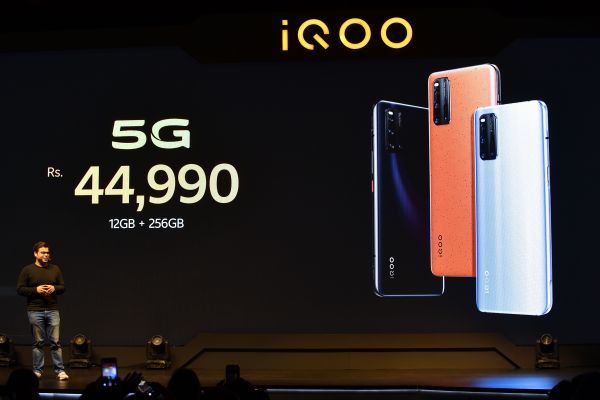 India is unlikely to have any substantial coverage of 5G until at least the end of next year, with telecom operators in the country yet to participate in spectrum auction. But that hasn’t stopped Chinese vendors Oppo, Vivo, and Xiaomi from bringing 5G-enabled smartphones to the world’s second largest handset market.

Xiaomi, Vivo’s sub-brand iQoo, and Oppo’s sub-brand Realme have all moved in tandem to unveil their 5G smartphones in the last one week. While Xiaomi, which has been the top handset vendor in India for more than two years, only showcased its recently unveiled 5G-enabled MiMix Alpha smartphone at several of its physical stores in the country, the other two companies have moved to launch new phones.

Realme, which is giving the top phone makers a run for their money in India, launched the X50 Pro 5G that features a 6.44-inch display of screen resolution 1080 x 2400 pixels with support for 90Hz refresh rate. It is powered by Qualcomm Snapdragon 865 SoC, coupled with 12GB of RAM, and 4,200mAh battery with 65W Super Dart charging support.

On the photography front, it houses a 65MP primary shooter, 8MP ultra-wide sensor, 12MP telephoto shooter, and a 2MP portrait sensor. On the front is a setup of duo-selfie sensors of 32MP and 8MP.

Executives at the companies said that the rationale behind launching a 5G phone so ahead of time was to offer future-proof devices. Additionally, Qualcomm also requires phone vendors to use X55 5G modem if they want to use its flagship Snapdragon 865 SoC.

An executive with Poco, which recently spun out of Xiaomi, also chimed in: