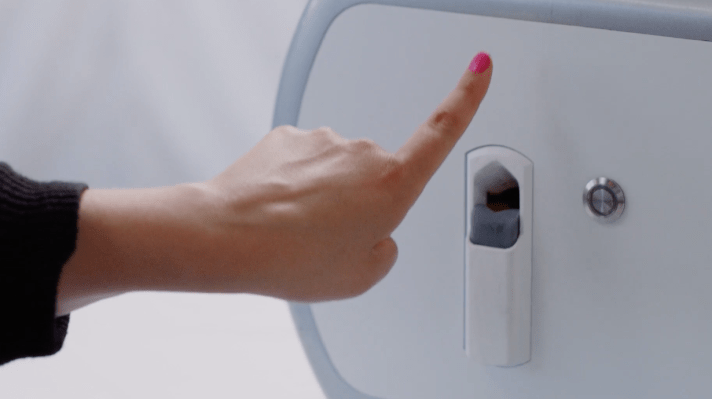 Coral is a company that wants to “simplify the personal care space through smart automation,” and they’ve raised $4.3 million to get it done. Their first goal? An at-home, fully automated machine for painting your nails. Stick a finger in, press down, wait a few seconds and you’ve got a fully painted and dried nail. More than once in our conversations, the team referred to the idea as a “Keurig coffee machine, but for nails.”

It’s still early days for the company. While they’ve got a functional machine (pictured above), they’re quite clear about it being a prototype.

As such, they’re still staying pretty hush hush about the details, declining to say much about how it actually works. They did tell me that it paints one finger at a time, taking about 10 minutes to go from bare nails to all fingers painted and dried. To speed up drying time while ensuring a durable paint job, it’ll require Coral’s proprietary nail polish — so don’t expect to be able to pop open a bottle of nail polish and pour it in. Coral’s polish will come in pods (so the Keurig comparison is particularly fitting), which the user will be able to buy individually or get via subscription. Under the hood is a camera and some proprietary computer vision algorithms, allowing the machine to paint the nail accurately without requiring manual nail cleanup from the user after the fact.

Also still under wraps — or, more accurately, not determined yet — is the price. While Coral co-founder Ramya Venkateswaran tells me that she expects it to be a “premium device,” they haven’t nailed down an exact price just yet.

While we’ve seen all sorts of nail painting machines over the years (including ones that can do all kinds of wild art, like this one we saw at CES earlier this year), Coral says its system is the only one that works without requiring the user to first prime their nails with a base coat or clear coat it after. All you need here is a bare fingernail.

Coral’s team is currently made up of eight people — mostly mechanical, chemical and software engineers. Both co-founders, meanwhile, have backgrounds in hardware; Venkateswaran previously worked as a product strategy manager at Dolby, where she helped launch the Dolby Conference Phone. Her co-founder, Bradley Leong, raised around $800,000 on Kickstarter to ship Brydge (one of the earliest takes on a laptop-style iPad keyboard) back in 2012 before becoming a partner at the seed-stage venture fund Tandem Capital. It was during some industrial hardware research there, he tells me, when he found “the innovation that this machine is based off of.”

Vankateswaran tells me the team has raised $4.3 million to date from CrossLink Capital, Root Ventures, Tandem Capital and Y Combinator . The company is part of Y Combinator’s ongoing Winter 2020 class, so I’d expect to hear more about them as this batch’s demo day approaches in March of next year.

So what’s next? They’ll be working on turning the prototype into a consumer-ready device, and plan to spend the next few months running a small beta program (which you can sign up for here.)