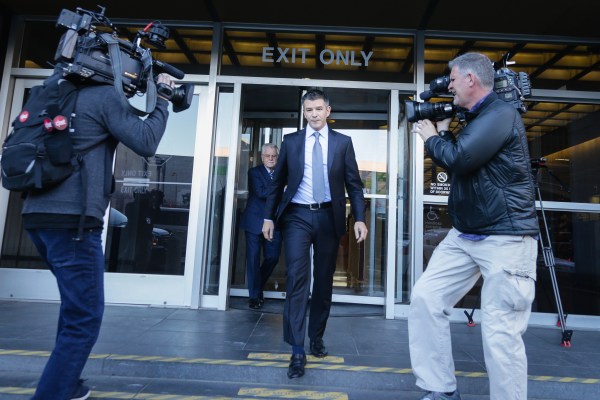 1. Uber founder Travis Kalanick is leaving the company’s board of directors

Uber founder and former CEO Travis Kalanick will officially resign from the board as of December 31, to “focus on his new business and philanthropic endeavors,” according to a company press release.

Kalanick, who was forced out as Uber CEO and eventually replaced by Dara Khosrowshahi, has been in the process of selling off his considerable ownership stake in the company. In fact, it looks like Kalanick has now sold all his remaining stock.

Dating app Plenty of Fish has pushed out a fix for its app after a security researcher found it was leaking information that users had set to “private” on their profiles. Before the fix, the app was silently returning users’ first names and postal ZIP codes, according to The App Analyst.

3. As DraftKings finds an exit, a reminder of what could have been

DraftKings, a betting service focused on fantasy sports, will go public via a reverse merger. Not too long ago DraftKings and its erstwhile rival FanDuel were ubiquitous on television; now the two companies are fractions of what they once were. (Extra Crunch membership required.)

It’s too late to order things online, and brick-and-mortar stores are either closed for the week or absolutely slammed. So what can you do? Subscriptions!

Connie Loizos looks at the controversy around the three-day-long MDL Beast Festival in Riyadh, Saudi Arabia. The event, promoted by a number of celebrities and social media influencers, aimed to promote the efforts of its de facto ruler, Crown Prince Mohammed bin Salman (known as MBS).

A year from now, the Samsung Galaxy Fold’s turbulent takeoff may well be a footnote in the largest story of foldables. For now, however, it’s an important caveat that will come up in every conversation about the nascent product category. (Extra Crunch membership required.)

7. Micro-angelo? This 3D-printed ‘David’ is just one millimeter tall

3D printing has proven itself useful in so many industries that it’s no longer necessary to show off, but some people just can’t help themselves. Case in point: this millimeter-tall rendition of Michelangelo’s famous “David” printed with copper using a newly developed technique.