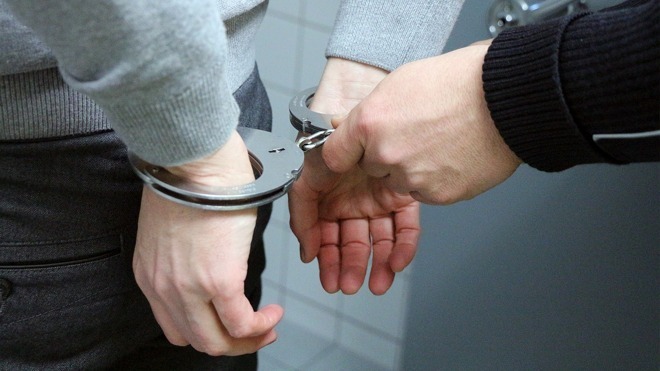 An iPad stolen from a FedEx truck, a Sam’s Club theft scheme, and more news from the brother of Pablo Escobar’s iPhone competitor.

A man in handcuffs (image courtesy of Pixabay)

The latest in a regularAppleInsider series looking at the world of Apple-related crime.

Police are looking for two men who they say stole $4,000 worth of Apple products from a Target in Aberdeen, Md. According to The Baltimore Sun, one of them asked a store employee to open a cabinet, at which point the other suspect began shoveling the products into a bag.

The same two men are tied to two other similar thefts elsewhere in Maryland. The report said that the two thieves were “keeping their distance from each other” during at least part of the theft, which was caught on video:

State police in Georgia have arrested three people who they say attempted to $9,500 worth of new iPhones from a Sam’s Club in the Atlanta area. Trib Live reports the accused conspirators attempted to open a fake Visa account to buy seven iPhone Pro Max phones.

But in the middle of the incident, one of the accused was recognized as someone who had been fired from a Sam’s Club-associated firm, and told to leave the store. The trio fled, but later caught and charged with access device fraud, theft, identity theft, retail theft, and theft by deception.

iPads stolen from school in Arkansas

With most of the nation’s schools closed, some thieves have seen an opportunity to steal electronics equipment from them. According to KATV, thieves broke in and stole $54,000 worth of iPads from a classroom at an elementary school in Little Rock, Ark, in early April. The thieves also reportedly took five Walkie-Talkies.

The police report says the thieves took “Logi brand iPads with keyboards,” but presumably the iPads were equipped with Logi keyboard accessories.

FedEx truck stolen with iPad inside

A FedEx driver doing deliveries in the Sacramento area had his truck stolen. CBS 13 reports the truck was recovered five minutes later, with everything accounted for except an iPad.

A man who has since been elected to British Parliament got into fisticuffs with a man on a train who attempted to steal his iPhone X. Manchester Evening News writes Robert Largan, who was elected last year as a member of the Conservative Party, described the physical altercation in court.

Largan said that in the incident, which took place last year, he pursued a “drunken lout” who took his phone, which led to Largan being punched in the face and receiving the threat “I’m going to murder you.” The man, who had been recalled to prison after the incident, admitted responsibility to the court.

The U.S. Customs and Border Protection (CBP) office in Philadelphia said on April 14 it seized two shipments from China consisting of 20,000 pieces of counterfeit consumer electronics. The release included a picture of what CBP described as an “Apple iPhone.”

Last year Roberto Escobar, the brother of the late Colombian drug lord Pablo Escobar announced plans to launch what it called a foldable and “unbreakable” gold smartphone. The phone was meant as an iPhone competitor, with Escobar also declaring an intention at the time to sue Apple, for “cheating the people and selling worthless phones.”

In March, a YouTuber discovered that the “gold phone” was actually a Samsung Galaxy Fold covered in gold stickers.

Now, The Register reports that Roberto Escobar has sued the company’s former COO, alleging that he has both run off with money belonging to the company and took control of the passwords of its YouTube channel.

Police in Huntsville, Tex., are investigating a theft at a bar and restaurant that took place in mid-April, in which thieves took an iPad, a sound machine and two commercial ovens. According to Item Online, the theft took place at After Hours on the Ave, and while the ovens were taken from the parking lot, the thieves are believed to have then entered the business and taken the other items.

Have an Apple crime story for us? Email AppleInsider and tell us about it.