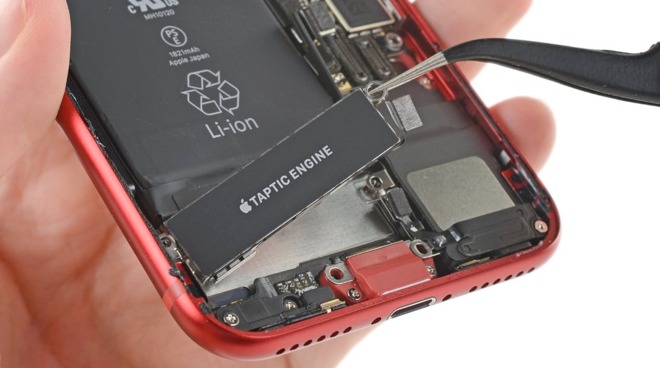 The iPhone SE 2020 is a relatively easy to repair mobile device, a full teardown of the latest iPhone model has revealed, with straightforward replacements of core components and cross-compatibility with the iPhone 8’s versions making the smartphone a repair shop’s dream.

The Taptic Engine can be easily removed and switched (via iFixit)

An initial teardown report on Sunday hinted at how easy it was to repair the new iPhone SE, due to components including the Taptic Engine, camera, SIM tray, and display assembly being swappable with versions used in the iPhone 8. In a full teardown, Apple’s design decision to use existing modules has led to a device that is relatively easy to fix by repair outfits.

Monday’s iFixit teardown starts with an x-ray of the device alongside the iPhone 8, and shows there to be relatively few immediate differences between the models. Aside from some changes to the antenna and shifting of chips on the logic board, it is hard to tell the difference from that image alone.

Opened up using a familiar procedure of heat and suction cups on the display and back cover, the inspection reiterates Sunday’s findings for some components, but also points out the similarities for others. The battery in the iPhone SE, for example, uses a different connector but ultimately is the same capacity as the iPhone 8 version at 6.96Wh.

A closer inspection of the camera indicates the iPhone SE is seemingly reusing the version included in the iPhone 8, with later testing revealing the component is interchangeable between models. It is reckoned the iPhone SE’s camera benefits from the image processing capabilities of the A13 Bionic System on Chip. 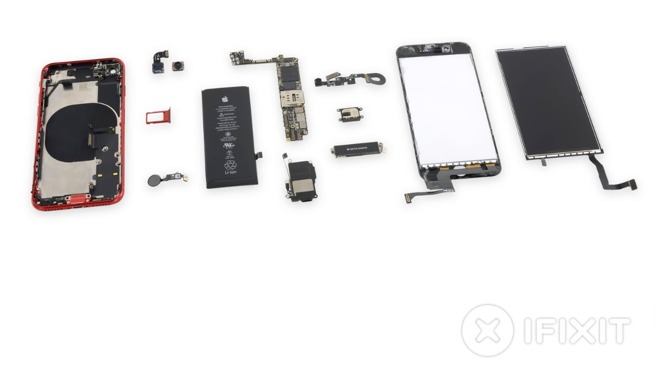 The iPhone SE 2020, disassembled (via iFixit)

On one side of the logic board is Apple’s A13 Bionic SoC layered on 3GB of Samsung memory, an Intel modem, Skyworks power amplifier modules and low-band PAMiD, an Avago mid/high band PAMid, and a Cypress USB power delivery IC. The other side has Toshiba flash storage, an Apple-designed power management IC, USI Wi-Fi and Bluetooth SoC, a Broadcom touch controller, and other unidentified audio chips.

While the display in the iPhone SE lacks 3D Touch, the screen is largely identical to the iPhone 8 version, including relatively similar thicknesses, though the newer component lacks a layer of capacitors and a control chip on the rear. The displays are otherwise fully interchangeable, but adding the iPhone 8’s screen to an iPhone SE won’t enable 3D Touch.

In summarizing the teardown experience, iFixit is “pretty thrilled that Apple Frankensteined this phone together with parts from previous models,” in the belief replacement parts should be easier to fine. Reusing existing manufacturing lines will also produce “less waste overall,” which will help the environment.

The iPhone SE for 2020 has been issued a “repairability” score of 6 out of 10, with the use of cross-compatible and independently replaceable components, as well as straightforward repairs for the display and battery, working in its favor. While points were docked for the IP67 seals complicating the repair process and Apple’s use of four different device drivers, the fragile back of the device is the biggest issue, deemed “impractical to replace.”