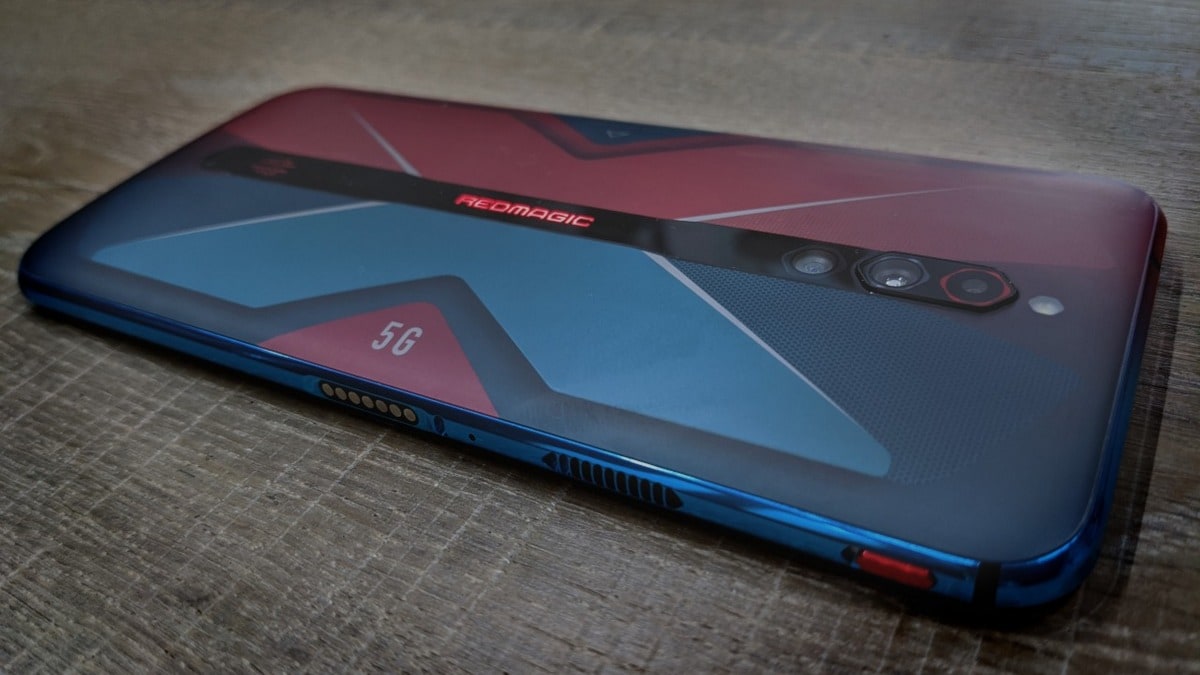 Nubia Red Magic 5G, the upcoming gaming smartphone from ZTE’s sub-brand Nubia, has already gathered a lot of hype around it with its impressive specifications and design. Now, an alleged live image of the phone has surfaced online, thanks to a benchmarking website. The image shows a dual tone back with the combination of blue and pink. Since it is a close-up photo of the phone, it also shows the 5G badge on the blue side and the illuminated ‘Red Magic’ text on the central black strip. Additionally, the website has shared some FPS numbers from the games it tested on a pre-release Red Magic 5G.

In the image shared by Game Bench, the big ‘X’ on the back of the phone is clearly visible and there’s a mesh like pattern between the ‘X’ and the black strip. The left side or the blue side of the phone shows the pogo connector, ventilation grill, and red alert slider. The three cameras on the back are also clearly visible and what’s interesting is that the top two sensors are slightly raised from the body while the third sensor is flush with it. The flash is placed above the top camera.

The recent TENAA listing of the Red Magic 5G showed both sides of the phone. The right or red side houses the capacitive shoulder buttons, a ventilation grill, power button, and the volume rocker.

Coming to performance, Game Bench also tested a few games on the phone as it touts a 144Hz display, which will likely be the first ever in a smartphone. Real Racing 3 on the Red Magic 5G reportedly gave a median frame rate of 144fps. Game for Peace, which is the Chinese version of PUBG Mobile, ran on a median frame rate of 90fps. It also tested Honor of Kings, which is the Chinese version of Arena of Valor, and got a median and minimum of 60fps as Game Bench was unable to unlock a mode higher than 60fps. Still, great news for gamers.

The phone will be powered by the Snapdragon 865 SoC, and pack 16GB of RAM, 256GB onboard storage, and Android 10, as previously revealed by Nubia Co-founder and President Ni Fei. There could be multiple storage variants of the phone.

The Red Magic 5G does not have an official release date till now. The company had originally planned to show off the phone at Mobile World Congress (MWC) 2020 in Barcelona but due to coronavirus concerns, the entire event was cancelled.