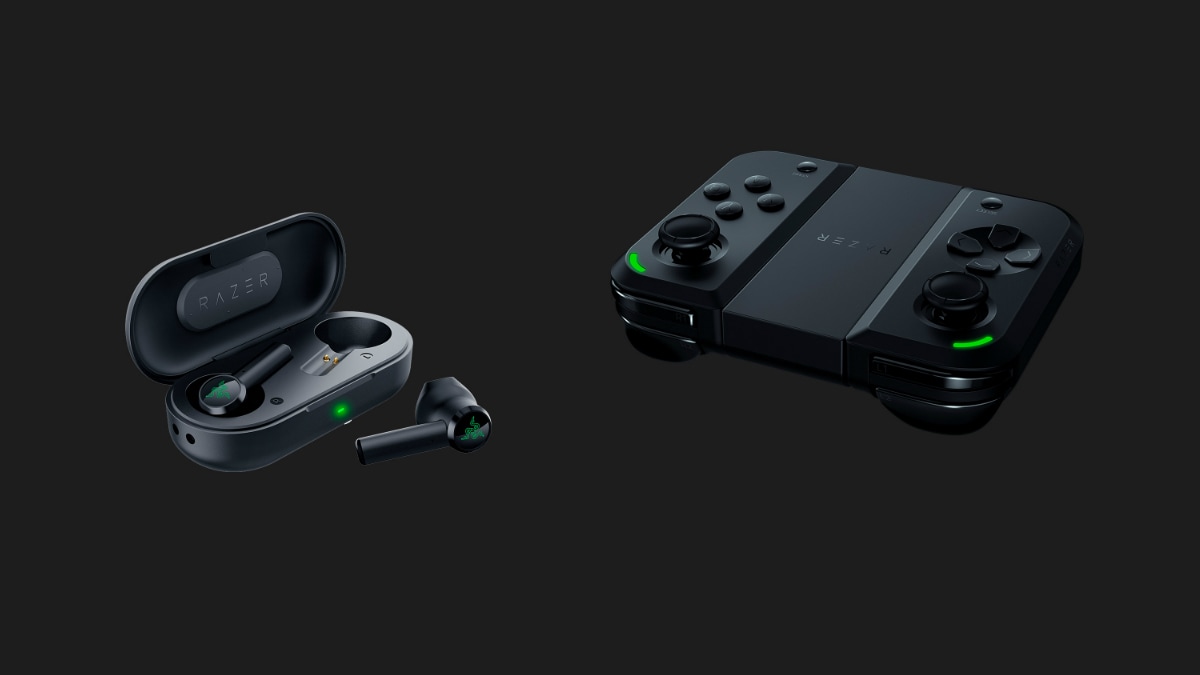 Razer has announced the launch of two new products. The first one is called the Razer Hammerhead True Wireless Earbuds, which are the company’s first truly wireless earbuds. These earbuds are compatible with both Android and iOS. The second product is called the Razer Junglecat, which is a dual-sided mobile gaming controller (only) for Android, wherein the controllers fit on both sides of your handset, much like the Nintendo Joy-Cons. Both the Razer Hammerhead True Wireless and Razer Junglecat will retail for $99.99 (roughly Rs. 7,100) in the US.

The Razer Hammerhead True Wireless Earbuds somewhat resemble the design of the AirPods, but they do offer a pair of silicone earbuds sleeves inside the box for providing a better fit in the ears. They also come with an Ultra-Low Latency Connection, that promises to deliver an extremely low 60ms input latency. This means that users won’t hear stutters in audio while watching videos or listening to songs, and it will also be a huge advantage for gamers, allowing for a truly immersive experience. Also, these earbuds are touch-enabled and voice-assistant compatible, meaning they can be controlled using your smartphone’s virtual assistant.

The Razer Hammerhead True Wireless Earbuds feature Bluetooth 5.0 that requires less power and auto-pairing seamlessly connects the earbuds to its last paired device. Other than this, they also feature a water-resistant IPX4 design and come with custom-tuned 13mm drivers for a quality listening experience. The claimed battery life is 3 hours for the earbuds and an additional 13 hours with the included charging case, which itself charges via a USB Type-C cable and takes 1.5 hours for a complete top-up.

Moving on to the Razer Junglecat, which is a portable dual-sided controller, aimed for a comfortable handheld mobile gaming experience. Do note, this portable gamepad only directly works with four phones at the moment — Razer Phone 2, Samsung Galaxy Note 9, Samsung Galaxy S10+ (US only) and Huawei P30 Pro (International). So, there’s a custom case that comes inside the box in which you can attach one of the four phones we just mentioned, and the controllers can then be attached on both sides of the custom case. Just in case, you don’t have any of these four aforementioned devices, then there’s a separate adapter included in the box, which makes the whole thing work as a standalone gamepad controller that pairs with other Android devices and Windows PCs.

There’s a Razer Gamepad app for your smartphone specifically designed for the Razer Junglecat, that lets you find the best games supported by the gamepad, and also lets you create your own button layout for other supported titles. Other features include low-latency connection, Bluetooth low energy and sensitivity adjustment function. The Razer Junglecat charges via USB Type-C and at the moment is not supported on iOS. You can check out the complete list of compatible games here.