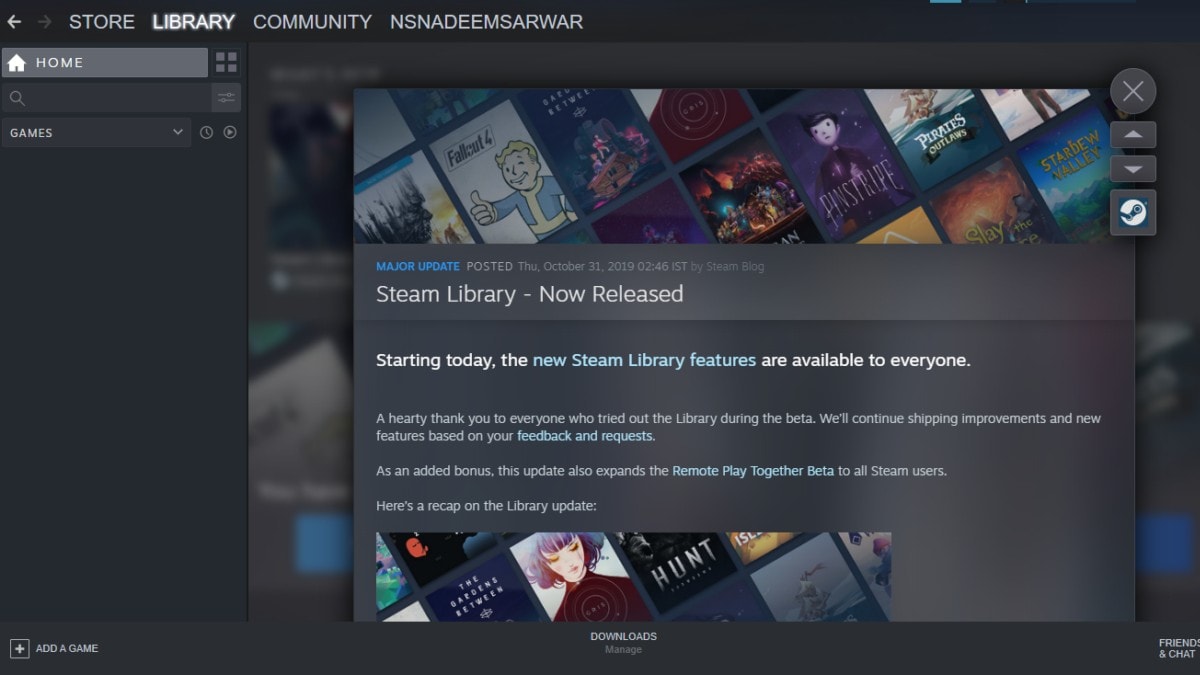 Valve announced back in March that Steam will soon get a major design makeover with tweaks such as improved categorisation and scaleable thumbnails. The promised Steam redesign is now live, thanks to a new update that also introduces the Remote Play feature in public beta to let players enjoy a co-op game with friends. The redesigned Steam interface brings a central hub that collects game news, friend activity, and more. A new Events tab has also arrived to let players keep a tab on all in-game events that would otherwise go unnoticed unless actively looked for.

Talking about the redesign, the Steam Library section now has a new landing page that provides easy access to game updates, recently played titles, and the entire collections section. The new interface also makes it easier to check when a new update has arrived and also see a preview of the changes it brings before installing it. The library home page also serves as the hub where players can check what their friends are playing. These changes were detailed as part of a Steam Client update, and you can also read other changes the new client version has brought.

Additionally, players will now be notified about events in the library itself, instead of getting bombarded with notifications. Aside from the interface redesign, the latest Steam update also brings the Remote Play Together feature in beta for all users, allowing multiple users to enjoy a game simultaneously, but with only one player having the actual game. So essentially, you fire up a game, and all your friends are able to remotely participate in the multiplayer experience without having to own the game.

With the open beta of Remote Play going live, the devs have reduced the stream latency, and frame drops caused by the load on host CPU have been brought down too. Moreover, the update also allows a one-time skin reset and upgrades the embedded Chromium build in Steam to version 77.0.3865.90 as well. Also, free-to-play games will now continue to remain in the players’ library even after being uninstalled. Additionally, the update adds playtime tracking for SteamVR workshop items and fixes a tonne of bugs on all compatible platforms.

Outlook Is Getting Split View, Do Not Disturb, and Other Useful Features on iPad, iPhone, and Apple Watch