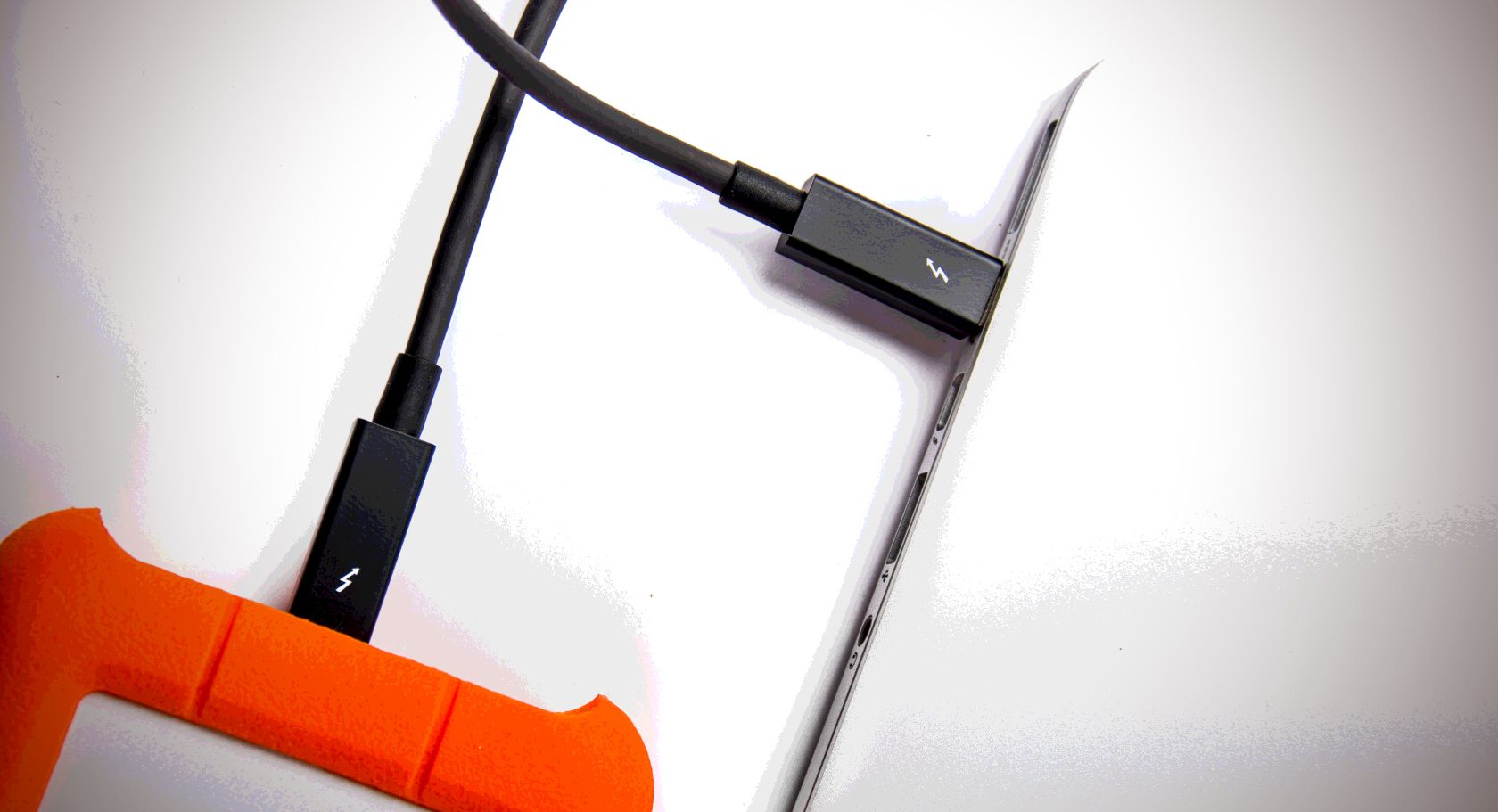 You may have heard about Thunderbolt 4 and that it is almost identical to Thunderbolt 3 in terms of looks and speeds.

At CES 2020, Intel announced the latest update to its Thunderbolt protocol, Thunderbolt 4.

At a glance, you may not see what’s different about the newer Thunderbolt 4. It still uses the same USB Type-C connector, still offers 40Gbps speeds, and still uses the lightning bolt icon.

But it now comes with the increased minimum required performance standards, more possibilities for productivity, and USB4 compatibility.

Furthermore, unlike Thunderbolt 3, which could only manage one 4K display at once, Thunderbolt 4 can support up to two 4K displays simultaneously. You can also connect one 8K display, handy as high-resolution monitors are becoming more common.

Another exciting move from Intel is that laptops that require less than 100W of power can use Thunderbolt 4 for charging. Indeed, Intel will require manufacturers to offer at least one Thunderbolt 4 compatible port to deliver this functionality.

Related: How to Charge Your Laptop Without a Charger

Intel introduced the Thunderbolt 4 update with their 11th Gen Tiger Lake processors. Here’s a quick rundown of some of Thunderbolt 4’s main features:

Related: USB-A vs. USB-C: What Is the Difference?

What Thunderbolt 4 Means for Businesses

Thunderbolt 4’s primary feature is its ability to simplify connectivity and compatibility for its users.

Businesses are moving towards work-from-home environments, and Thunderbolt-equipped laptops are a one-size-fits-all solution they can use and distribute to their team members.

Thunderbolt 4 laptops come with several protocols, including DisplayPort 1.4, PCIe 4.0, and USB-4, all through a single port. This design allows your devices maximum functionality while remaining thin and lightweight, allowing you to design custom workstations tailored towards the needs of your employees and organization.

Does My Laptop Support Thunderbolt 4?

Intel’s Evo-based laptops are promised to launch with Thunderbolt 4 with an “exceptional mobile experience,” according to Intel. They’ve been working with famous laptop brands like Lenovo, HP, and Dell to design these 11th Gen laptops featuring Thunderbolt 4.

These laptops are expected to have improved performance, responsiveness, and battery life to take things to the next level for mobile computing and productivity.

You may have already started seeing some of these laptops being released to the market, and there are many more set to launch.

Related: USB-C vs. USB 3: What Is the Difference Between Them?

The USB standard is improving rapidly, but it still hasn’t reached the level of Thunderbolt yet, especially now when there’s Thunderbolt 4.

Thunderbolt devices are more expensive than USB Type-C, but they’re longer-lasting and are tested better than USB devices.

Get the Most Out of Thunderbolt 4

Laptops are getting thinner each day, and their ports are shrinking as well.

Thunderbolt 4 accessories come with simplicity and maximum performance along with maximum reliability and long life. For the first time, accessory manufacturers will now have the option to launch Thunderbolt 4 docking stations and dongles with up to four Thunderbolt ports, all thanks to the introduction of the Goshen Ridge JHL8440 chip.

This will open the possibilities of allowing you to plug in a high-speed PCIe SSD, a 4K 60Hz display, or something like a charging cable which you can use interchangeably in any of the ports.

The 7 Best Thunderbolt Accessories for Your Mac