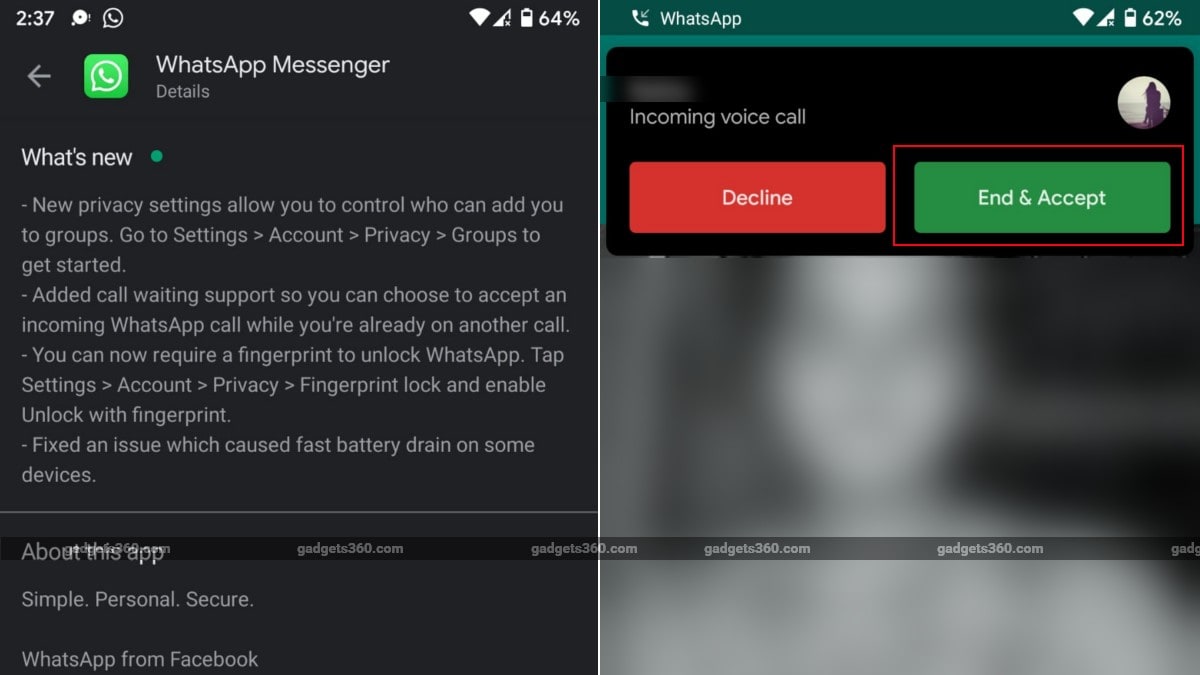 WhatsApp has begun the rollout of an update for its Android app that brings a highly useful feature – call waiting. As the name clearly suggests, this features alerts users when they receive a WhatsApp call when they are already in the middle of another WhatsApp call with someone else. Rather than automatically disconnecting the second incoming WhatsApp call, users will now get an alert and can choose to either decline it, or disconnect the ongoing WhatsApp call to accept the other one. However, it must be noted that this is not the same as putting a call on hold, since two users can’t be on the same line simultaneously. The feature is now available for both Android, after being made available for the iPhone app late last month.

In case you haven’t received the update yet, you can download the stable build from APKMirror here. To recall, in late November, WhatsApp v2.19.120 for iOS brought the call waiting feature alongside a redesigned Chat screen, as well as the ability to quickly send your messages directly from the Braille keyboard when using VoiceOver mode.

The incoming call UI in WhatsApp now shows a green ‘End & Accept’ button alongside the ‘Decline’ button. If you press the red ‘Decline’ button, the incoming call will be cancelled and you can carry on with your ongoing call. However, if you tap on the ‘End & Accept’ button, the ongoing call will be disconnected so that you can talk to the other person.

In addition to call waiting, the new WhatsApp update also marks the wider rollout of the updated group privacy feature that allows users to decide who can add them to a WhatsApp call. You can check this out by following this path: Account > Privacy > Groups in the settings menu. The changelog of the new stable and beta WhatsApp updates also mentions the arrival of fingerprint lock feature for the app that was announced back in October. You can enable this feature by going to Settings > Account > Privacy > Fingerprint lock.