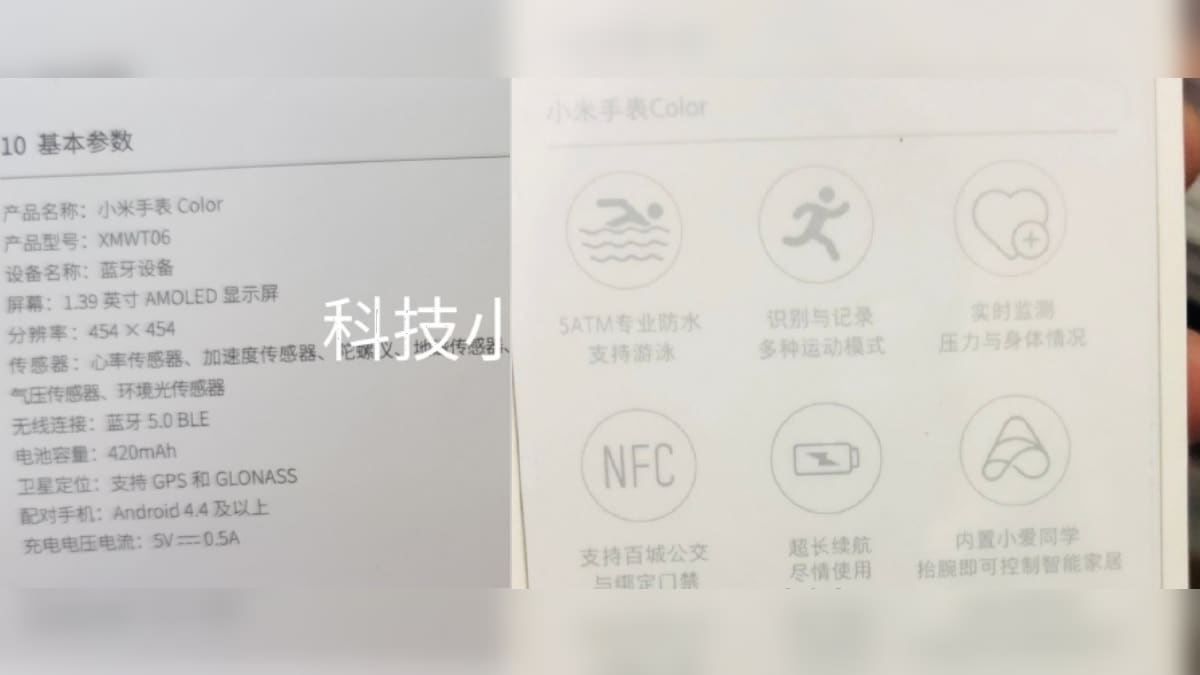 Xiaomi announced the Mi Watch Color earlier this week, but so far, the company has not revealed the internal hardware of its latest smartwatch. However, a few live images of the Mi Watch Color’s retail package have surfaced online, and they reveal some of its key specifications such as display size and resolution, battery capacity, and connectivity features among other details. Additionally, Xiaomi has officially confirmed that the Mi Watch Colour will offer 14-day battery life, and that it will come pre-loaded with 10 professional sports modes for fitness tracking.

Starting with the leaked images of the Mi Watch Color’s retail package, they come courtesy of a tipster on Weibo. The product details printed on the retail package reveal a 1.39-inch AMOLED display with a resolution of 454 x 454 pixels. The Mi Watch Color, which carries the model number XMWT06, supports Bluetooth 5.0 BLE standard, alongside GPS, Glonass, and NFC. The smartwatch will be compatible with phones running Android 4.4 KitKat or a higher version.

Battery capacity of the Xiaomi Mi Watch Color is tipped to be 420mAh, and as per a post by the official Mijia Weibo channel, it will last up to 14 days on a single charge. The leaked images of the Mi Watch Color’s retail package also reveal 5ATM water resistance that means the watch can remain functional in water up to a depth of 50 metre for a span of 10 minutes. Additionally, heart rate and swim-tracking features are also mentioned.

Moreover, Xiaomi has also confirmed that the Mi Watch Color will come preloaded with 10 professional sports modes for fitness tracking, and they will rely on custom sports algorithms. Aside from offering bands in a multitude of colours and material choices, the Mi Watch Color will also come with a wide catalogue of watch faces for customisation. More details regarding the smartwatch will be revealed in the days leading up to its first sale on January 3 in China.